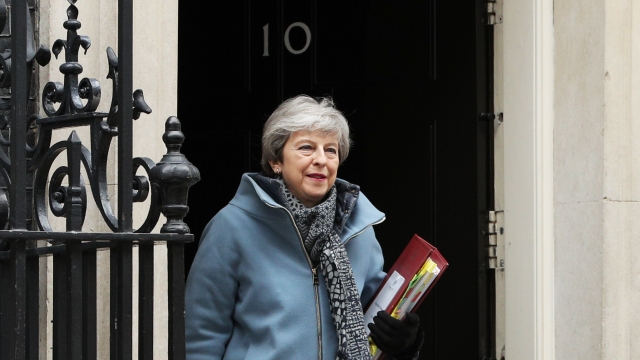 May told Conservative Party lawmakers she's prepared to leave her post sooner than she intended "in order to do what is right for our party."

Theresa May says she'll step down as the U.K.'s prime minister if her Brexit deal is passed.

According to several reports, May told Conservative Party lawmakers Wednesday she's prepared to leave her post sooner than she intended "in order to do what is right" for her country and party. It's unclear exactly when she would step down.

Parliament has rejected May's divorce deal twice now, and lawmakers are currently in the process of voting on alternative options to that agreement.

But, as The Wall Street Journal notes, May's announcement ups the chances that her deal will finally secure a majority in Parliament if it's put to a vote for a third time.

Last week, the EU agreed to postpone Brexit until May 22, but only if Britain's Parliament approves May's deal. If lawmakers reject it, the U.K. will have until April 12 to let the European Council know what it's going to do instead.