Theresa May: No Return To A Hard Border With Ireland And N. Ireland 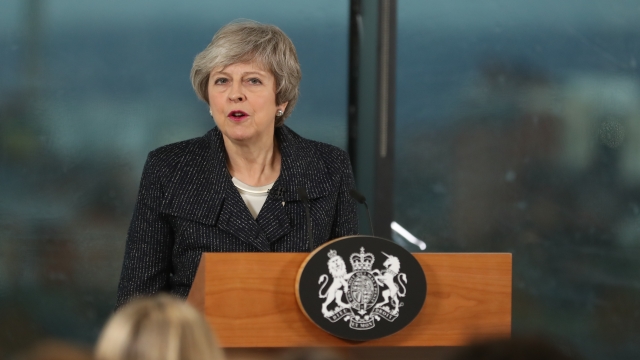 SMS
Theresa May: No Return To A Hard Border With Ireland And N. Ireland
By Ahmed Jawadi
By Ahmed Jawadi
February 5, 2019
​May said the U.K. will not leave the EU without a provision to prevent the construction of a physical border between Northern Ireland and Ireland.
SHOW TRANSCRIPT

U.K. Prime Minister Theresa May said Tuesday she is not planning on bringing back a hard border between Ireland and Northern Ireland as part of the Brexit deal.

During a visit to Belfast, May said the U.K. will not leave the European Union without a deal to prevent construction of a physical border between the U.K. territory of Northern Ireland and the sovereign nation of Ireland.

There's technically always been an international boundary between Northern Ireland and Ireland. But since both sides were part of the EU, neither one really had to force the issue. And although the U.K., Ireland and the EU want to avoid physical checks on the border, they disagree on how to go about making sure that doesn't happen.

Britain's Parliament rejected May's Brexit plan last month, in part because of concerns about the border plan. May's deal included a safeguard mechanism, known as the backstop. That would have kept the U.K. bound by EU market and customs rules until a new trade deal is put in place. Parliament directed May last week to reopen negotiations with the EU over the backstop, but EU leaders said the deal is set in stone and not up for renegotiation.

Britain is scheduled to leave the EU on March 29, but still needs Parliament's blessing before it can move forward.