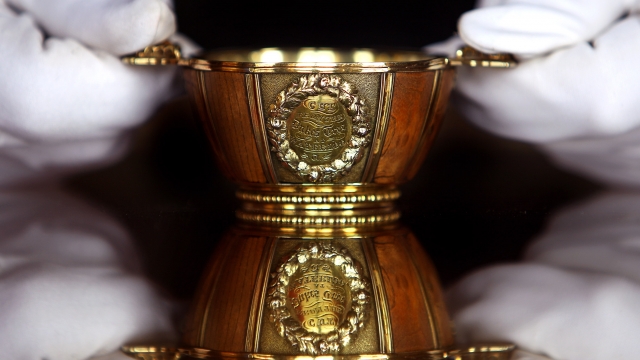 Ever heard of a quaich? It's a drinking cup that dates back to the 17th century Scottish Highlands.

You won't find many people drinking from one nowadays, but quaiches do still symbolize welcome and friendship.

Which is why British Prime Minister Theresa May is gifting one to President Donald Trump during their first official meeting as heads of state.

Trump also has strong ties to Scotland. Aside from having built two golf courses in the country, the president has some Scottish ancestry through his mother's side of the family.

Gifts from foreign leaders have been more extravagant.

Other gifts have been a tad more strange — like when Australia's Northern Territory gifted Barack Obama with crocodile insurance in 2011, just in case he was attacked while visiting.

But, accepting gifts from a foreign leader is complicated. Since 1966, presidents have had to get congressional approval to accept gifts over a certain limit. Today, that limit is $390.

And if Trump wants to keep the quaich for himself, he'll have to purchase it at fair market value. Otherwise, it'll go to the National Archives.

When she was secretary of state in 2012, Hillary Clinton purchased a pearl necklace given to her by Myanmar opposition leader Aung San Suu Kyi. The necklace was valued around $1,000.