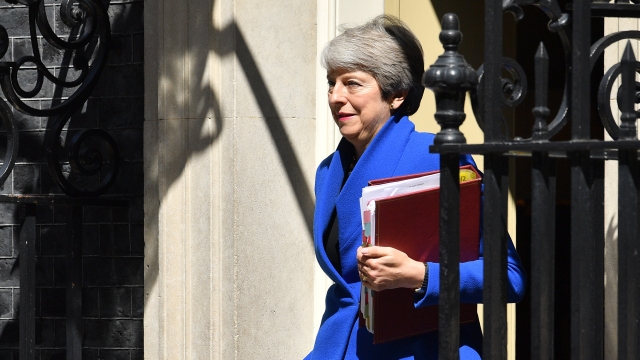 Theresa May is officially no longer the prime minister of the U.K.

Her exit comes one day after members of her ruling Conservative Party selected Boris Johnson as their new leader. May announced her resignation several months ago. She'd faced numerous calls to step down after she failed multiple times to get Parliament to sign off on her Brexit deal.

Wednesday's political handover was carefully choreographed. May first fielded her final round of questions from lawmakers in the House of Commons.

She then headed back to 10 Downing Street, which serves as the official residence and office of the British prime minister. There, May gave her final speech as the leader of the U.K.

"Thank you for putting your faith in me and giving me the chance to serve," May said. "This is a country of aspiration and opportunity, and I hope that every young girl who has seen a woman prime minister now knows for sure that there are no limits to what they can achieve."

After that, May traveled to Buckingham Palace, where she met with Queen Elizabeth II and formally tendered her resignation. This paved the way for the queen to invite Johnson to form a new government. Johnson is the 14th person to serve as prime minister during Elizabeth's reign.

May said Wednesday that she'll resume her role as a member of Parliament, continuing to represent the southern town of Maidenhead.