There Were 13 Mass Shootings In The U.S. This Weekend 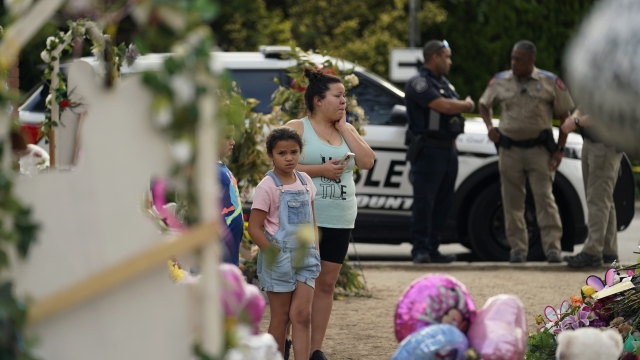 SMS
There Were 13 Mass Shootings In The U.S. This Weekend
By Ben Schamisso
By Ben Schamisso
June 6, 2022
At least 17 people are dead and dozens wounded after 13 mass shootings in the U.S. since Friday.

In Philadelphia, a packed street turned into a terror scene.

"While many of us were out enjoying the beautiful day in the city, a horrendous and unthinkable act happened in a very popular local and tourist hangout," said Danielle Outlaw, Philadelphia police commissioner.

According to police, the shooting happened after a fight between at least two men. No arrests have been made.

Just a few hours later, there was another mass shooting in Chattanooga, Tennessee — this time near a downtown nightclub. Authorities there say gunshots and a fleeing car killed three and hurt 14.

Since Friday, there have been at least 13 mass shootings in cities across the U.S., leaving at least 17 people dead and dozens wounded, according to research group Gun Violence Archive, which has been tracking those numbers. They describe mass shootings as four or more people shot, excluding the shooter.

In Arizona, there were two back-to-back carnages in the Phoenix metro areas.

Early Saturday, the first one happened outside a lounge bar, killing two and wounding two. Then 24 hours later, a strip mall party altercation turned into a rampage, leaving a 14-year-old girl dead and eight others wounded.

The mass shootings didn't stop there. More children were hurt at graduation parties in South Carolina and Virginia.

"We had two fights between females... and then shortly after that is when the shots fired call came in," said Major Brad Badgerow, with the Chesterfield County Police Department in Virginia.

Gun violence in the U.S. typically surges as the summer nears, but in the wake of massacres in Uvalde, Texas; Buffalo, New York; and Tulsa, Oklahoma, city leaders nationwide say federal action is needed now.

"It's going to be a long summer, and we have got to get out in front of it and put a stop to it," said Chattanooga, Tennessee, Mayor Tim Kelly.

The 13 weekend incidents mentioned here are those considered mass shootings — when at least four people are shot in a single event. But counting all incidents where one person or more was hurt, the Gun Violence Archive tracked nearly 300 shootings nationwide in just one weekend.

In Chicago, 33 people were shot and six of them killed, yet because of how frequently this happens, it wasn't front-page news there.