There's Something Wonderful About This Kid's Bottle-Flipping Act 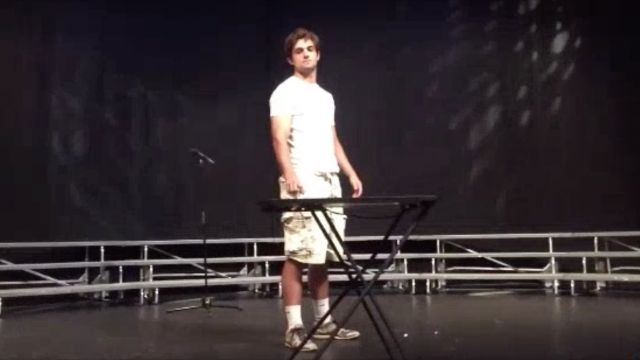 SMS
There's Something Wonderful About This Kid's Bottle-Flipping Act
By Matt Picht
By Matt Picht
May 25, 2016
Mike Senatore's senior talent show act was sublime in its simplicity.
SHOW TRANSCRIPT

There's beauty in mundanity, and perfection can be found in even the most basic actions. Take, for example, this video of a water bottle flip.

That was Mike Senatore's performance in his senior talent show. It's a pretty simple trick, but the flawless execution has propelled the trick to viral fame.

On the face of it, it seems pretty basic: The water sloshing around in the bottle while it's in midair shifts the bottle's center of gravity around, which helps it stick the landing. But getting the exact right amount of flip takes a lot of practice and coordination — as Newsy found out.

The flip is impressive enough, but everything else in this clip — the epic music, the dramatic dance toward the table, the casually flawless flip and the ecstatic crowd — all contribute to making this moment sublime.

Senatore told The Charlotte Observer he's not sure he could hit that moment again; apparently, his exaggerated run-up came after he misjudged the distance to the table. The senior says he's been planning and practicing his trick for over a year.

Senatore's planning to attend the University of South Carolina in the fall and major in political science. Until then, he's focusing on parlaying his viral fame into an appearance on "Ellen."

This video includes clips from WCNC and WBTV.