There Are Plenty Of Reasons To Keep Using Landers On Mars 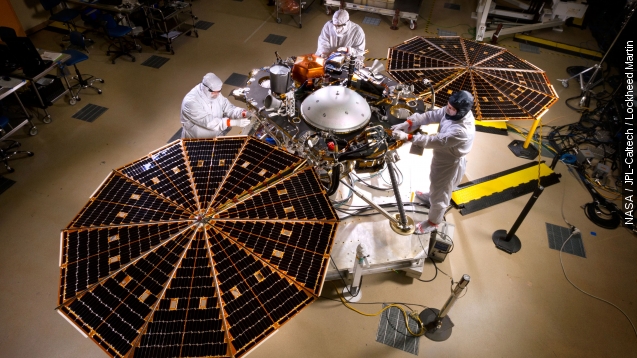 SMS
There Are Plenty Of Reasons To Keep Using Landers On Mars
By Evan Thomas
By Evan Thomas
May 28, 2015
For a cost-effective, easily developed and stable platform for geological science on Mars, it's hard to beat a lander.
SHOW TRANSCRIPT

NASA has finished building its next probe to Mars. Now, it's stress testing time.

InSight will now undergo a battery of tests in the next seven months to make sure the probe can survive the transit to Mars.

It’s a lander, which is a rarity for NASA these days. In the last decade, only one of its four missions to the Martian surface was a lander — Spirit, Opportunity and Curiosity were all rovers, meaning they could all drive around. (Video via NASA Jet Propulsion Laboratory)

Rovers get all the attention because they can move around and take selfies and whatnot, but there’s still a place in science for stationary landers.

InSight will drill into the Martian surface with seismometers and heat probes, a job that requires a static platform. (Video via NASA)

This will be the first dedicated measurement of Mars’ geological processes. Scientists are hoping to gain, well, insight into the formation of terrestrial planets.

“Seismology, for instance, is the standard method by which we've learned to understand the interior of the Earth - and we have no such knowledge for Mars.”

There are other benefits to a lander. InSight is based in part on Phoenix, which saves money on the development and testing of the platform itself.

And a lander is cheaper than your average rover. Where Curiosity rang in at $2.5 billion — not counting ongoing expenses for maintaining operations past the original timeline — InSight carries a relatively tame price tag of $425 million. (Video via NASA)

That said, InSight has run into some criticism. NASA decided to fund InSight instead of missions to comets or Saturn’s moon Titan. The continued spotlight on Mars has some wondering whether the agency is focusing too closely on just one neighbor. NASA officials say that’s not the case.

InSight is scheduled to launch in March of 2016.