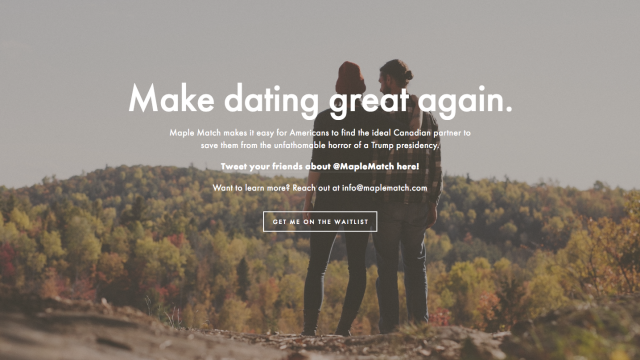 SMS
There's Now A Dating Site For Americans Who Need A Trump Escape Plan
By Katie Link
By Katie Link
May 10, 2016
Disclaimer: Marrying a Canadian won't actually give you automatic citizenship.
SHOW TRANSCRIPT

The new site, Maple Match, says it "makes it easy for Americans to find the ideal Canadian partner to save them from the unfathomable horror of a Trump presidency."

And based on recent numbers, a lot of Americans are looking to be saved. On Super Tuesday, Trump won seven states — the next day, Google tweeted that the phrase "Move to Canada" hit its highest search history ever.

What’s more, so many people were searching the phrase that it reportedly caused the Canadian government’s immigration website to crash.

Trump has continued to dominate since sweeping Super Tuesday. As the business mogul looks to become the party’s nominee, Maple Match creator Joe Goldman said he recognized a need.

He told The Guardian: "Americans are using this as a serious opportunity to meet Canadians. ... I’ve had people begging me to start this."

But here's something to keep in mind, getting married to a Canadian doesn't give you citizenship. You still have to apply like everyone else.