There Might Be A Health Benefit To Popping Champagne Bottles 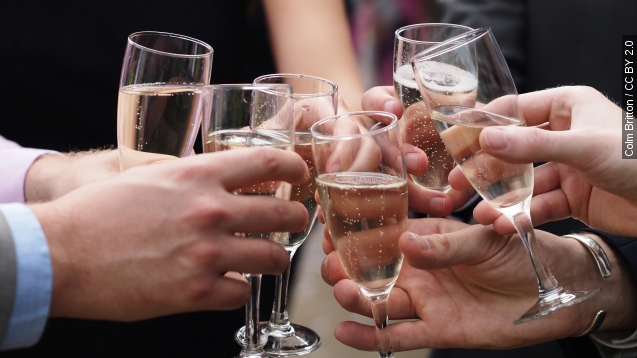 A 2013 study is making some waves on social media for touting the medical benefits of — wait for it — champagne. (Video via Paramount Pictures / "The Wolf of Wall Street")

Pop those bottles, y'all. And maybe share with some friends. A University of Reading study found that drinking one to three glasses of the bubbly drink a week could help delay the onset of dementia, as well as counteract memory loss. (Video via Moet & Chandon)

That's because the alcoholic drink contains a higher-than-normal level of phenolic compounds that help change proteins to better store memories in the brain. Phenolics are found in two red grapes — Pinot Noir and Pinot Meunier — both of which are used in the production of champagne.

We'll cheers to that. And speaking of the Pinot Noir variety, those are the same types of compounds that have been found in red wine. (Video via Universal Pictures / "Bridesmaids")

And if dementia and memory loss prevention isn't a convincing enough reason to indulge with some bubbly, the same researchers at the University of Reading found champagne also affects blood vessel walls.

Champagne fans, brace yourself: That study suggests having two glasses a day helps increase nitric oxide levels in blood, which lowers blood pressure. This, in turn, can help prevent heart disease and stroke.

It doesn't have to break the bank, either. A lower-priced bottle will give you the same health benefits as a bottle of, say, Dom Perignon.

And here's the catch. The study was conducted on rats, so the next step is to test it on humans. And for memory loss prevention, the researchers believe they will see outcomes similar to the effects of eating blueberries and cocoa.

So the next time you decide to channel your inner @champagnepapi, remember the key word from this study: moderate. Researchers say "a very low intake of one to two glasses a week can be effective." (Video via Universal Motown Records / Kid Cudi, DreamWorks / "Old School")

This video includes an image from Colm Britton / CC BY 2.0.