There Aren't Many Gender-Neutral Halloween Costumes For Kids 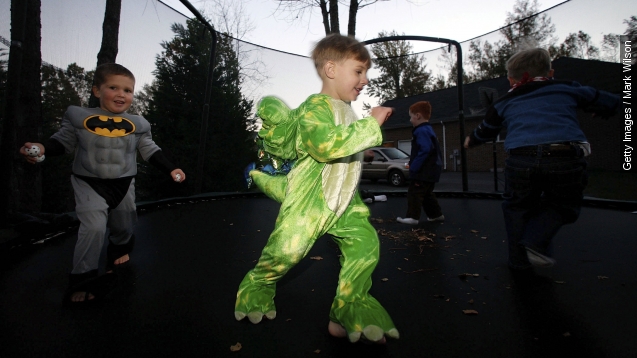 Blue for boys, pink for girls. Gender roles in toys and colors are specific for kids. So it shouldn't be surprising that most Halloween costumes aren't gender neutral.

Not even 10 percent of costumes, in fact. As for the small portion of gender-neutral options? They're mainly designed for infants.

Some people have expressed outrage over low-cut tops and short skirts in little girls' costumes.

Halloween costumes are arguably a reflection of society — and that includes the sexualization of females. An American Psychological Association report found that objectifying girls starts from a young age and females are sexualized more than men.

And that's just talking about the sexualization of costumes, much less a girl who wants to trick or treat as football player or a male-centric superhero.

So what's a parent to do when there are limited costume choices for their child? Some are rebelling against the stereotypes — or rather, letting their kids rebel.

One dad who let his son dress up as a princess from the movie "Frozen" wrote on Facebook: "Halloween is about children pretending to be their favorite characters. Just so happens, this week his is a princess."

As we already mentioned, this isn't just a costume thing, either. While some blame past decades for neat and tidy gender roles, gender stereotyping in toys is more defined today compared to back then.

Staunch gender roles of the 1950s were in a time of predictable, nuclear families. But then the '70s rolled around, and feminist movements swept away most gender-specific toys.

Now, we're back to having gender-specific toys and costumes. But maybe more parents will let their boys dress up in princess costumes. (Video via Northampton Community Television)