There&#039;s How Many Calories In A Thanksgiving Dinner?! 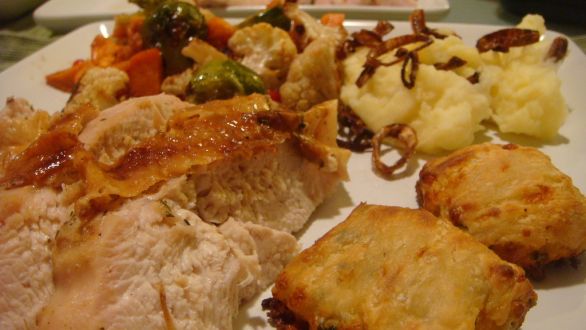 SMS
There&#039;s How Many Calories In A Thanksgiving Dinner?!

By Nathan Giannini
November 28, 2013
The Calorie Control Council released an estimate of the number of calories in an average Thanksgiving dinner, and the number might shock you.
SHOW TRANSCRIPT

Thanksgiving is here, which means millions of Americans will travel across the country to spend time with their loved ones, maybe watch a little football... and stuff an obscene amount of food into their faces.

To put it into perspective, that’s roughly equivalent to:

However you spin it, that’s way more than we should probably be eating — around twice the recommended daily calorie intake and more than three times for fat.

Gizmodo came up with 10 ways to burn off all that Thanksgiving goodness that just went straight to your thighs. Although, they don’t sound like much fun. They include:

- Or play some football ... for nearly seven hours. So strap on some pads and get ready for that Turkey Bowl.

Dieticians would, of course, recommend you skip the dinner table gorging — as well as the post-meal marathon — and practice portion control.

Overeating is, of course, not the only Thanksgiving Day danger you need to watch our for. According to insurance company State Farm, there are more cooking fires on Thanksgiving than any other day of the year.

Deep frying the turkey can be particularly risky — fire departments respond to around 1,000 deep fryer-related fires a year, which cause more than $15 million in property damage. (Via National Journal)

Well, even if we’re not safe, at least those two birds President Obama pardoned last week will be having a fun-filled Turkey Day, right?

Well, apparently not. Despite White House claims that the birds live out their days in comfort and care, they usually only last a few months. (Via The White House)

“The presidential birds, bred to be eaten, are so fat that by the time of their pardon, their days are numbered. A farmer told ABC News: ‘Their flesh has grown so fast, and their heart and their bones and their other organs can't catch up.’”

And on that uplifting note, we wanted to wish you a happy Thanksgiving. Maybe we’ll see you when we’re out jogging after eating that second slice of pumpkin pie ...