Theories On Why Brian Williams Twisted The Truth 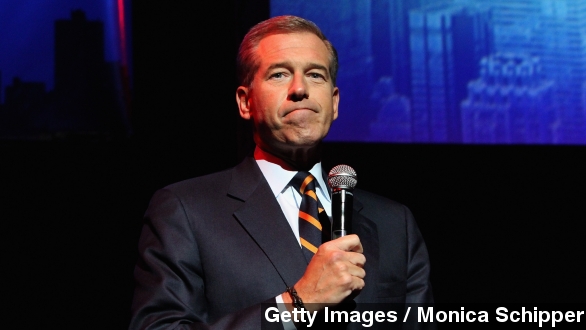 For many regular viewers of NBC's Nightly News — and for some of us in the media — Brian Williams' "fall from grace" has been a tough pill to swallow. And we're still not really sure how to digest it.

Of course, it all started with one on-air apology for a false account he gave of his experiences in the Iraq War in 2003.

"I want to apologize. I said I was traveling in an aircraft that was hit by RPG fire. I was instead in a following aircraft," Williams said on NBC.

But it didn't stop there. Reports have surfaced questioning his accuracy on other events, including his coverage of Hurricane Katrina in 2005. (Video via Columbia Journalism School)

NBC suspended Williams for six months without pay Tuesday. And, while his reputation continues to take a beating, many people are trying to piece together why Williams would misrepresent the facts the way he did.

Many are pointing to his celebrity status as one possible culprit.

"When you come on a show like 'Kimmel' or any of the late night shows, you don't want to be a dweeb, alright, you want to have something interesting to say," O'Reilly said.

"If he lies a lot ... celebrities do that all the time. ... They make up stories because in the United States of entertainment ... being uninteresting is the greatest sin you can commit," Fox News Contributor Bernie Golberg said.

"We got ourselves a case of info-tainment confusion syndrome. It occurs when the celebrity cortex gets its wires crossed with the medula-anchor-dala," Jon Stewart said.

Others in the media speculate Williams might even be suffering from a false memory, a condition in which a person's recollection of events gets factually skewed over time.

As a writer for The Washington Post puts it: "[Are the conflicting reports] malicious or intentionally misleading? Or, are they just stories that get better in the retelling, as humans tend to do? ... Whether one is hit or not, surely the terror of flying where rockets are near can magnify and distort events."

Westin told The Huffington Post Williams isn't the only one out there twisting stories. He says the NBC newsman is just a microcosm of a much broader TV news landscape that puts too much emphasis on the business side of things.

"This is part of a much larger phenomenon. I've seen over the past 15 years a significant shift toward emphasis on marketing and branding and promotion. ... a lot of the television news organizations are making the reporters and the anchors the story," former ABC News President David Westin said.

Explanations aside, Williams' popularity among the public is not looking good. And, unless this somehow blows over, he'll have to work hard to restore his image.

Before NBC's announcement of his six-month suspension, a poll by Rasmussen Reports showed 40 percent of American adults think Williams should step down permanently.

"Imagine how hard it's going to be to regain the trust of the audience when he's not on the air. And he's sitting on the bench. It's a very difficult position for him to be in," CNN Senior Media Correspondent Brian Stelter said.

Williams has yet to comment on his suspension. NBC says Lester Holt will continue anchoring the "Nightly News" in his absence.