River Flooding Can Get Even Worse Days After A Storm Passes 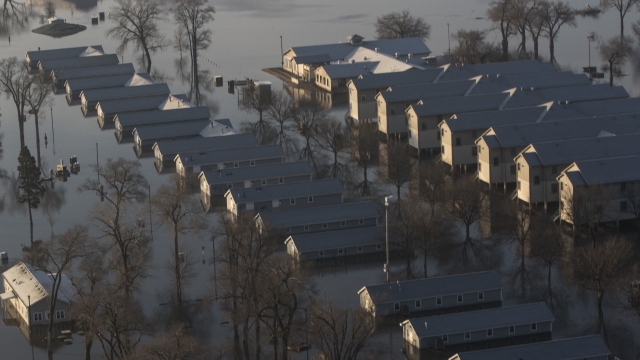 SMS
River Flooding Can Get Even Worse Days After A Storm Passes
By Tyler Adkisson
By Tyler Adkisson
March 22, 2019
During a major storm it's not uncommon for the worst flooding to come days after the rain passes. It takes time for that water to travel downstream.
SHOW TRANSCRIPT

In some cases, the worst part of a storm comes well after it passes. Look at the flood-prone midwest: While it may seem like the worst of it would've occurred during rainstorms, there's a good chance that places downstream won't experience that flooding until a few days later, when rivers crest at their highest point.

When millions of gallons of rain fall out of the sky at once, there’s only so much room for it. If the ground becomes saturated, the rest will run off into creeks, tributaries or other bodies of water, and move toward the nearest river.

It can take three or four days for this rainwater to accumulate in a river. Enough water will cause flooding that reaches a high point called a crest, and this crest will move downstream.  Enough rain in one area can cause flooding after the fact two or three states away, even if those areas never experienced the downpours.

When heavy rains in Nebraska dump enough water into the Missouri River, for example, crests will affect Omaha first — and St. Joseph, Missouri days later. According to Senior Service Hydrologist Scott Watson, the National Weather Service has to track the crest's progress along the whole course of the river to know how severe it might get. 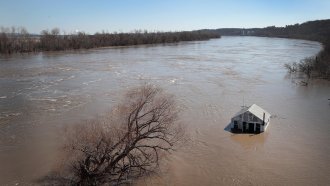 "As you move down the river, you’ve got additional tributaries coming in," Watson said, "so you’re adding quite a bit of additional flow as you have the other rivers flow into the main stem of the Missouri River. You need to see what those changes in the flow are as you go down the river to be able to do a forecast for the river."

As we've seen, the floodwaters of a cresting river can cause significant damage. Heavy spring rainstorms can overtop or even break through hundreds miles of levees, and leave towns and crops underwater. And when the preceding season brings enough snowfall, its slow melting can prolong the risks of flooding downstream.

"It looks like it’ll be a pretty busy year if we get normal rainfall," Watson said. "With the wet conditions we’ve had over the Winter, there’s still snow melt up north that hasn’t melted and come through yet. It might not be as significant as flooding as we have right now, but we will likely see more flooding off and on into the spring."