The Wins And Losses Of Hong Kong's Protests, One Year Later 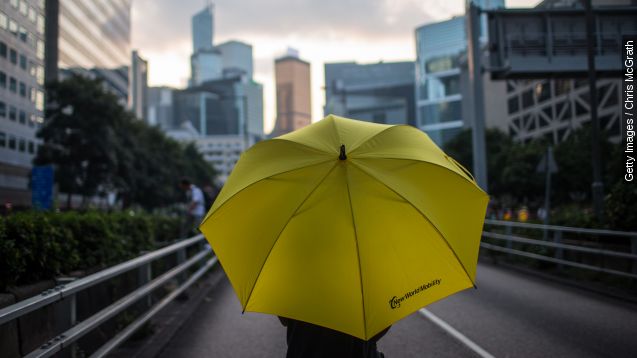 Hong Kong's pro-democracy Umbrella Movement began a year ago, and the movement's leaders are taking stock of what the protests accomplished.

Hundreds of yellow umbrellas are up once again outside Hong Kong’s government headquarters to mark the one-year anniversary of the Umbrella Movement.

It was created last year when about 200,000 pro-democracy protesters denounced electoral reforms that failed to make Hong Kong's government autonomous from Beijing. (Video via BBC)

A heavy-handed government crackdown only spurred the movement on. The demonstrations lasted for almost two months, pitting many young pro-democracy Hong Kongers against older, pro-China citizens.

And two of the main goals of the 2014 protests — to achieve universal suffrage and oust unpopular pro-Beijing chief executive Leung Chun-ying from office — still haven't been met.

But some say there is much to celebrate. Pro-democracy leader Joshua Wong says the movement was successful in giving young people political awareness.

“With the new generation’s political awareness, I’m still optimistic with the future to continue to fight for democracy. … I do not regret any decision I made in the last year,” Wong said in an interview with CNN.

The next test for the pro-democracy movement comes during district council elections in November, followed by the parliamentary elections in 2016.