The Winners Of MLB's 2015 Offseason 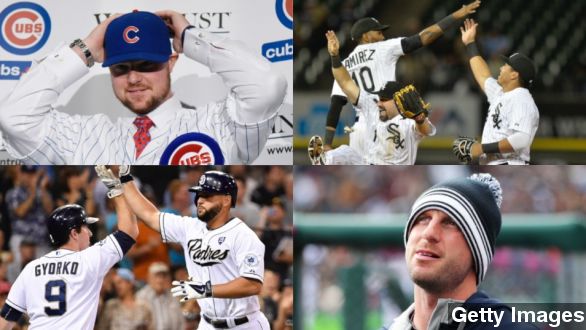 Major League Baseball Opening Day is just weeks away. Teams are revamped and players are signed as fans everywhere await MLB Opening Day 2015. It's been a wild offseason, too.

Here are the winners: the Cubs, White Sox, Padres and pitcher Max Scherzer.

Chicago will likely be the home of some great baseball in 2015 thanks to major moves made by both the Cubs and White Sox.

The Cubs' offseason moves suggest they're fed up with dwelling in the bottom of the NL Central the last few years. After bringing in former Tampa Bay Rays manager Joe Maddon, the Cubs signed one of the market's most sought-after pitchers, lefty Jon Lester.  (Video via Sportsnet | WSBT)

"I believe in the plan they have in place right now," Lester said in a press conference.

They also dealt for catcher Miguel Montero and outfielder Dexter Fowler in separate deals and signed a bevy of other solid players in the process.

The 2015 Cubs will look a lot different, as will their crosstown counterparts, the White Sox.

"S-M-A-R-D-J-A," said one fan trying to spell Samardzija. (Via The Times of Northwest Indiana)

The team also inked one of the free-agent market's top hitters in Melky Cabrera, further bulking up its outfield. (Video via YoDeportes.com)

CBS Sports writes, "Rarely has a team so successfully and systematically answered so many of its major questions."

"The gist of it was to keep the pitching staff intact but add those key pieces like a Kemp, Meyers, Middlebrooks, Upton, Norris," Padres President and CEO Mike Dee said.

"This is impressive. I think I only see three guys from last year. Everyone else you brought in new," said KSWB’s Raoul Martinez.

Now add James Shields to that list. Shields will reportedly be signing with the Padres, further strengthening their 2015 roster. (Video via Fox Sports)

Our last winner is new Washington Nationals pitcher Max Scherzer — and maybe his bank account, too.

"A lot of money and a lot of years for a 30-year-old pitcher," CBS's Vincent Bonsignore said.

The unique $210 million contract means he'll be getting paid $15 million a year for 14 years. It also doesn't hurt that he's joining one of the best teams and pitching rotations in the league.

The Nationals are favorites at 5-1 odds to win the World Series, according to VegasInsider.com.

But remember: Just because you win the offseason doesn’t mean you’ll win in the season. Check back next week for our list of the losers of this offseason.