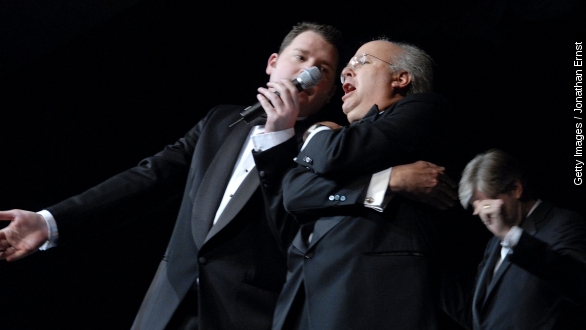 "I'm not to do jokes about any aspect of the president's personal life except his eating habits," Al Franken said in 1996.

"Everything you ate this evening was personally shot by Wayne LaPierre," Conan O'Brien said in 2013.

"They somehow always catch you with your shirt off. I know you're into this transparency thing, but I don't need to see your nipples," Wanda Sykes said in 2009.

"I always look forward to these dinners. … It's just a bunch of media types, Hollywood liberals. Democrats like Joe Biden. How come I can't have dinner with the 36 percent of the people who like me?" President George W. Bush said in 2006.

"In just eight years, I've given you enough material for 20 years," President Bill Clinton said in 2000.

"Seriously, Mr. President, your hair is so white, it could be a member of your cabinet," O'Brien said in 2013.

"George W. Bush is leaving in eight months. The vice president is already moving out of his residence. It takes longer than you think to pack up an entire dungeon," Craig Ferguson said in 2008.

"Four years ago, I was locked in a brutal primary battle with Hillary Clinton. Four years later, she won't stop drunk texting me from Cartagena," President Obama said in 2012.

"Oh, what the hell, let's move on to something else," President Ronald Reagan said in 1988.

This video includes footage from C-SPAN and The Ronald Reagan Presidential Foundation and Library and an image from Robert Bejil / CC BY 2.0.