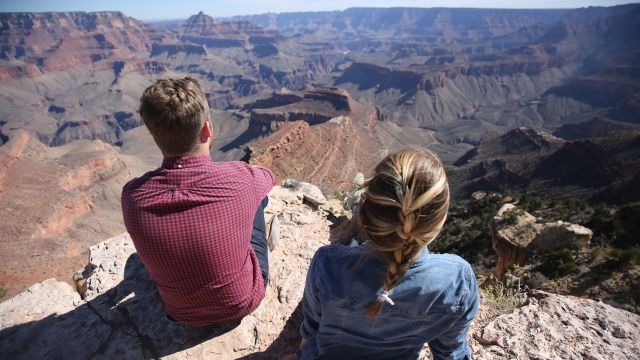 Newsy's Kate Grumke: So, when we were planning "Off The Trail," obviously we couldn't pass up the opportunity to stop by the Grand Canyon. It's the 100-year anniversary of the National Parks Service, so we had to find our park just like everyone is across the country.

Grumke: I'm obsessed with them. So, one thing that's really interesting about the Grand Canyon is that it was among the first places to be set aside under the Antiquities Act.

Toombs: But we're in a new era of the Antiquities Act now because the Obama administration has used this act in a way that no president has before. He has designated more monuments and more national parks than any of his predecessors.

Grumke: Yeah, he's designated 265 million acres of land so far, and he still has a few months of being president. It seems it's kind of ramping up in the past few years. Since the Antiquities Act was signed into law, only four presidents have not used it. And they were all recent Republicans. When President Obama does this, he doesn't need anybody’s approval. The Antiquities Act works so that he can just come in and say, "This is going to be a national monument."

Toombs: His base and conservationists, they love this. But small government types, ranchers, Republicans in Congress — they do not love this.

Grumke: Right. They do not like the federal government coming in and taking. Because even if it were to be a park, a state could probably run that park, so they don't like the federal grab of land like this. Under President Obama, this is an unprecedented time for the Antiquities Act and for national parks in general.