'The Visit' Is A Return To Classic Shyamalan Horror 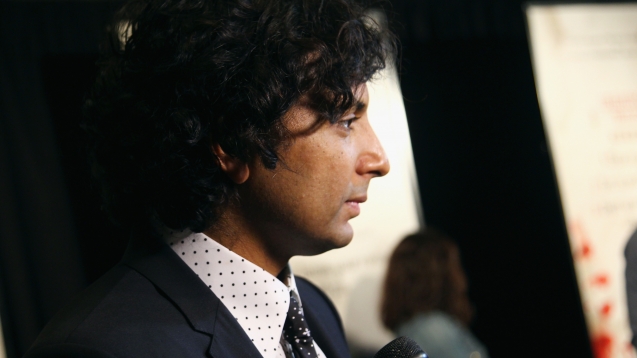 SMS
'The Visit' Is A Return To Classic Shyamalan Horror
By Eugene Daniels
By Eugene Daniels
September 12, 2015
The director of "The Sixth Sense" is back to doing movies that made him famous in the first place.
SHOW TRANSCRIPT

"We think there's someone outside the door," Tyler from "The Visit" tells the camera.

"What the hell was that?" his sister Becca says after seeing their grandmother naked and scratching on the door frame.

That was one of your grandparents who already warned you to stay in your room after bedtime.

"Bedtime here is 9:30. It's probably best if you two shouldn't come out of your room after that."

See? So if you aren't able to visit your nana ever again, you can blame M. Night Shyamalan. His latest movie "The Visit" hit theaters this weekend and almost made double its production budget in one day. The film shows two kids visiting their grandparents for the first time — and the grandparents are all jacked up. "The Visit" finally has Shymalan giving us exactly what made him famous. (Video via Universal Pictures / 'The Visit)

"In 'The Visit,' Shyamalan explores themes that he explored in his earlier movies. He's going back to really scary things," one of the producers Jason Blum said.

Kind of like, how a little kid survives a terrifying situation.

For a few years after Shyamalan's biggest hit, "The Sixth Sense" he made some really great movies. That was until "Lady in the Water," and then Marky Mark in "The Happening," and then a critically and fan-hated live-action adaptation of "The Last Airbender." It seemed like when Shyamalan deviated from the character-driven movies that made him famous, he ended up not doing well, something that doesn't seem lost on him. (Video via Warner Bros., 20th Century Fox, Paramount Pictures and Universal Pictures.)

"This is kind of a being born again kind of a movie for me," Shyamalan said recently.

But it looks like "The Visit" is getting the critical praise Night has been missing for awhile. Forbes even said, "‘The Visit’ is the one we’ve been waiting for, folks. It’s good. Oh my word, is it good. But more importantly, it is excellent in that specific way that reminds us why M. Night Shyamalan was once such a marvel."

So all it took was about a decade of bad movies and a return to his roots for Shyamalan to prove he's still got some good filmmaking left in him. (Video via Universal Pictures)