'The View' Co-Hosts Reunite (Yes, Even Rosie And Elisabeth) 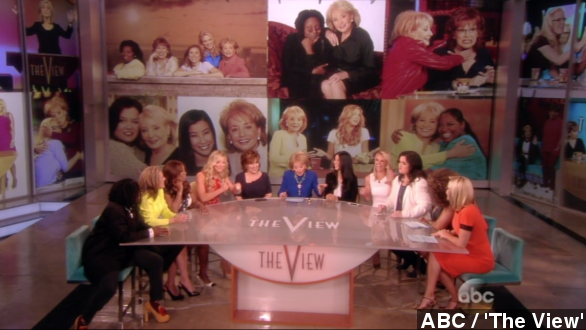 SMS
'The View' Co-Hosts Reunite (Yes, Even Rosie And Elisabeth)

By Brice Sander
May 15, 2014
To help send off Barbara Walters, Rosie O'Donnell and Elisabeth Hasselbeck reunited on "The View" for the first time since their infamous 2007 fight.
SHOW TRANSCRIPT

To celebrate Barbara Walters' retirement, all 11 past and present co-hosts of "The View" reunited on the talk show Thursday morning.

Yes, even Rosie O'Donnell and Elisabeth Hasselbeck, who infamously went at it in a split-screen argument on the show back in 2007, and it resulted in Rosie leaving the program. (Via Celebuzz, People, Fox News)

This was the first time they were on the show together since that day — and they were surprisingly smiley.

They walked out together, and check out how chummy they looked seated next to each other at the table. Of course they addressed the elephant.

JENNY MCCARTHY: "What do you miss most about sitting at the table?"

ROSIE: "Uh, fighting with this skinny one right here."

ROSIE: "No, honestly, I miss the camaraderie."

Yep, it looks like these two have put their differences aside. Elisabeth even shared a selfie from backstage on Instagram.

But as the Daily Mail points out, the real focus was on Barbara, not the formerly feuding co-hosts, with everyone sharing their favorite memory of the icon.

As Joy Behar said, the set-up looked like "The Last Supper," but with Barbara as Jesus.

And TooFab said this episode made Barbara's retirement all too real — it's the end of an era.

At the end of the episode, it looked as though the co-hosts had brought Barbara to the verge of tears. You can see they're seated at the show's original table, where they broke the news that the day's script, which they all had signed, would be headed to the Smithsonian.

Barbara's last day as co-host of "The View" is Friday.