The US Might Stop Recognizing Nicolas Maduro as Venezuela's President 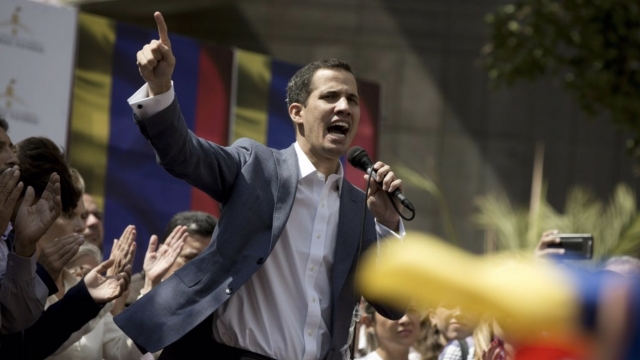 SMS
The US Might Stop Recognizing Nicolas Maduro as Venezuela's President
By Ahmed Jawadi
By Ahmed Jawadi
January 15, 2019
​The U.S. and several other countries have declared Maduro's presidency illegitimate.
SHOW TRANSCRIPT

President Donald Trump is allegedly considering recognizing Venezuela's opposition leader as the legitimate president of the country, instead of current President Nicolas Maduro.

Sources familiar with the matter told CNN that President Trump might recognize Juan Guaidó, the democratically-elected president of Venezuela's parliament, instead of Maduro, who was sworn in to his second six-year term as president last week. On Tuesday, Guaido and other members of the opposition-led Congress formally declared Maduro as a "usurper" to democracy.

The U.S. and several other countries say Maduro's win was fraudulent, and that he's a dictator who has led Venezuela into an economic crisis. Guaidó said he would take over the presidency temporarily to replace Maduro, as Venezuela's constitution allows a presidential vacancy to be filled by the president of the National Assembly.

The U.S. State Department said in a statement last week that it "commend(s) the courage of the National Assembly’s [...] president, and his decision to invoke the authorities of the Venezuelan Constitution."

Maduro defended his legitimacy in a speech last week, saying "We're a real democracy and [...] I am a truly democratic president."

Guaidó was detained last Sunday by Venezuelan government operatives two days after declaring his willingness to take over the presidency, but was let go shortly after. Guaidó has called for a nationwide protest on Jan. 23, the same day a mass uprising overthrew dictator Marcos Perez Jimenez in 1958.