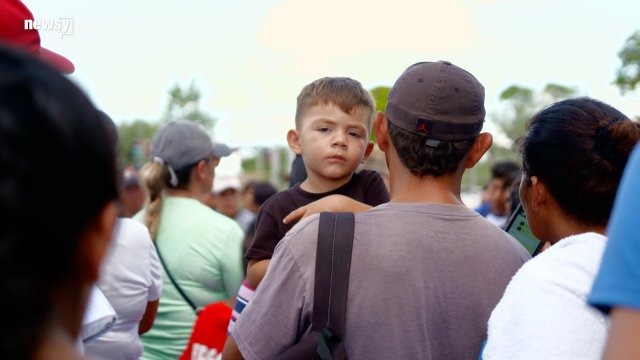 SMS
The US Is Making Migrants Wait In Dangerous Mexican Towns Without Aid
By Ben Schamisso
By Ben Schamisso
October 3, 2019
The U.S. is forcing thousands of asylum seekers to wait in dangerous border towns with little help from Mexico — and none from the U.S.
SHOW TRANSCRIPT

"I was kidnapped in Mexico, in Reynosa. We were in a bodega, when 12 or 14 hooded people suddenly appeared and threw us into a car. I called my family and they pooled their money to help me."

"The driver walked out behind me. He tried to take advantage of me. He touched me. He robbed me. He took all my papers and left me there."

Hundreds of migrants are camping in the streets of Matamoros, Mexico, waiting for their U.S. asylum hearings. Many told Newsy that Mexican cartels kidnapped or attacked them right before they turned themselves in to border agents. Yet the U.S. swiftly returned them all near or exactly where they had been attacked.

"I really don’t know how they let us back into Mexico knowing we were scared of going back to Mexico."

Under a fast-expanding program known as "Remain in Mexico," the Trump administration is forcing 50,000 Latin American migrants — and counting — to wait in Mexico for months until the resolution of their asylum cases. The policy results from a deal with the Mexican government, which agreed to provide "appropriate humanitarian protections" to the waiting migrants.

Yet, nearly all asylum seekers Newsy talked to in Matamoros say they were left to fend for themselves in foreign and dangerous border towns with minimal help from Mexico — and none from the U.S.

"They kidnap immigrants since they know they have family in the U.S. and they can ask for ransom. So we’re vulnerable here."

"From the moment you wake up, you can hear bullets fire."

So what exactly are the U.S. and Mexican governments doing to protect the migrants in limbo? Neither administration replied to Newsy's multiple requests for clarification. The White House says having asylum applicants wait outside the U.S. ensures they don't "become fugitives."

But there have already been 340 reported cases of rape, kidnapping and other violent attacks against the waiting migrants — according to Human Rights First. The U.S. State Department warns against traveling to Matamoros "due to crime and kidnapping."

Migrants and volunteers say Mexican officials have simply passed on the task of keeping the asylum seekers alive to local nonprofits. The growing tent city in Matamoros — within sight of south Texas — has no showers, no running water and only a couple Porta Potties.

"We’re washing ourselves in the river. Look at these little lumps that grow on our bodies. There’s nothing clean about that river. The water’s infected."

"The Mexican government isn't doing much. All I know is Mexico said they would let us wait in their country but they’re not helping. Other people come and they bring tents, water, food, all thanks to the church."

"I believe that the United States put a big responsibility on Mexico. They rely on us. We cross every day, we provide breakfast and dinner. We provide diapers, personal hygiene supplies, loading tents, bedding, and the Mexican officials basically come to us and say, 'We need you to bring tents, for example, or we need you to bring blankets.'"

Mexico does give all returned migrants a short-term humanitarian permit that prevents them from being deported and allows them to work. But migrants in Matamoros have had varied luck finding jobs.

"If you find work here you need a contract for a year and we are only here for two months. We can't get work because of that. Because we need to have an insurance, in case of an accident. That's why they wont give us work."

"When I came to Matamoros and I saw that the situation that people live here, I decided not to do the same. We rent a house. We got a job for example. I am a cashier."

Now, the Trump administration has said it doesn't return migrants to Mexico who are highly likely to face persecution there. But National CIS Council 119 — a union representing nearly 14,000 USCIS workers, including 600 asylum officers, says the bar to not be returned to Mexico is too high and violates federal law. We should also clarify that the White House makes an exception for unaccompanied minors, most Mexicans and those who don't speak Spanish.

"Our officers are troubled morally and ethically at the thought that people are being returned to an unstable situation in a country that is not their own, that does not appear to have the means to support, assist or protect them."

"One of our concerns is that those immigration agents do not even ask the individual if they're afraid to remain in Mexico. It's only if that applicant affirmatively says on their own 'Oh, but I'm afraid to go back to Mexico.' That's when they would be referred to an asylum officer. We have had cases where officers and their supervisors believe strongly that the individual met the high standard but they were overturned by higher ups at headquarters."

In the ongoing lawsuit against Homeland Security's "Remain in Mexico" policy, civil rights groups have argued that halting the program is "increasingly urgent" because of the dangerous conditions migrants face while waiting in border towns.

But in May, a federal appeals court allowed the Trump administration to implement the policy while the case proceeds. The court said that for now, "the likelihood" the migrants will be harmed in Mexico "is reduced somewhat by the Mexican government’s commitment ... to grant humanitarian status and work permits to individuals."