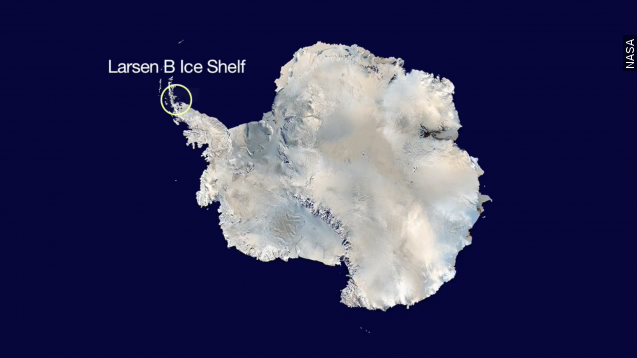 When NASA announced the Larsen B ice shelf would be completely disintegrated by the end of the decade, you'd be forgiven for not knowing why it mattered. (Video via NASA)

It matters because it could contribute significantly to rising sea levels, one of the biggest threats the world faces going forward. (Video via WPBT)

Larsen B is an ice shelf on the Antarctic Peninsula that first fractured in a big way in 2002, with two-thirds of the shelf collapsing in the space of six weeks.

But the way disintegrating ice shelves contribute to rising sea levels isn't as obvious as you might think.

The British Antarctic Survey's Director of Science David Vaughan explained, "The ice in an ice shelf is floating, so when it melts it won't have a big impact on sea level rise."

Instead — ice shelves serve as a resisting force for glaciers, which flow downhill on the continental shelf. So when the shelf disintegrates, the rate of ice flow into the ocean increases.

And that process has already started, following 2002's disintegration, with one glacier accelerating its flow rate, as it's known, by more than 35 percent.

But there might be a silver lining, albeit a very, very slim one, as NASA's lead researcher on the shelf explains:

"Now, we have this rare opportunity of this ice shelf destabilizing and eventually collapsing in front of our eyes. ... That will give us incredibly valuable lessons that we could use to understand what might be happening elsewhere," researcher Ala Khazendar said.