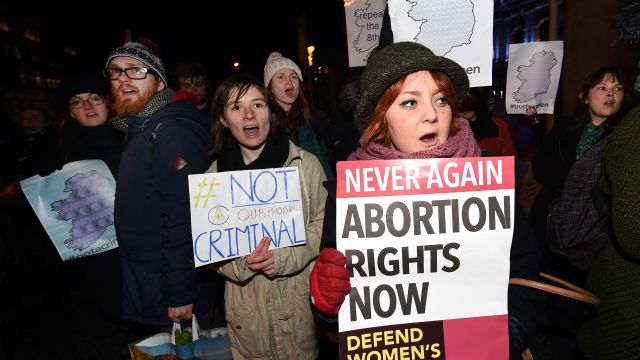 A United Nations panel said the country's ban on almost all abortions amounts to discrimination.

The UN's human rights committee just handed down its verdict on the 2011 case of Amanda Mellet, who was forced to choose between carrying an unviable pregnancy to term or traveling to the U.K. to get an abortion at serious financial cost.

Mellet chose the second option, as did more than 4,000 other girls and women from Ireland that year. Among other things, Mellet's complaint alleges Ireland denied her access to state-funded grief counseling typically offered to women who lose their pregnancies.

Ireland's laws currently ban all forms of abortion except when the life of the mother is in jeopardy. That last provision was only just adopted in 2013 after a woman died when doctors refused to perform a lifesaving abortion.

The UN's human rights committee said Mellet faced discrimination and degrading treatment thanks to Ireland's abortion ban. The committee called on Ireland to change its laws, and its constitution if need be, in order to prevent similar occurrences.

The resolution isn't binding, but it provides additional impetus for Ireland to reconsider its abortion laws. The ruling could also set a precedent for other states with restrictive abortion laws.

This video includes an image from Getty Images clips from Al Jazeera and The Irish Times.