New Evidence Strengthens Call For The Ultimate Sanction For Russia 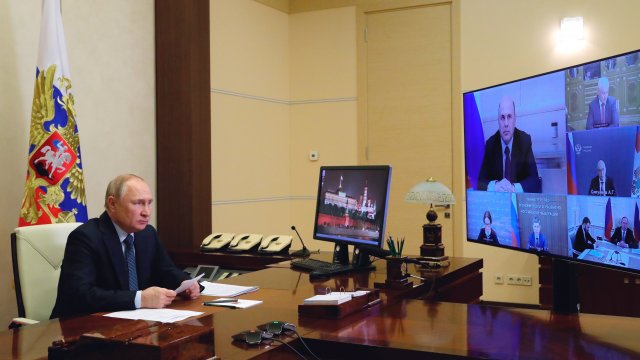 SMS
New Evidence Strengthens Call For The Ultimate Sanction For Russia
By Mark Greenblatt
By Mark Greenblatt
April 19, 2022
Evidence is mounting to push for adding Russia to the state sponsor of terrorism list, which only includes four countries.

Apartments and civilian homes in Ukraine have been shelled beyond recognition.

Russian bombs have exploded near hospitals and schools. There are mass graves, body bags and possible orders that German intelligence surfaced for Russian soldiers to kill civilians.

Now there are new calls for a stronger action to blunt the Russian aggression.

"Legally the case is pretty strong for adding Russia to the state sponsor of terrorism list," Jason Blazakis said.

Blazakis calls this list "the nuclear economic" option, but he believes it is appropriate now and says the impact would be multi-fold.

"It does broaden the kinds of things that the United States would prohibit from export to the Russian Federation," Blazakis said. "Essentially, you know, making sure certain kinds of things don't end up in Russia."

Russian assets in the U.S. would be frozen and countries that deal with Russia could be penalized.

"It would essentially make Putin a pariah and making it hard for him, I think, to recover his reputation," Blazakis said.

But Blazakis says the justification for the label goes far beyond Russia's current actions in Ukraine.

He points to reporting from the podcast Verified, The Next Threat and Newsy, which unearthed new evidence about Russia’s support for a designated terrorist group.

The Russian Imperial Movement operates freely from St. Petersburg as the only white supremacist group designated as terrorists by the U.S. government. The Russian government allows the group to continue to operate paramilitary training camps tied to attacks in Sweden and the training of other European extremists.

Its leader, also a designated terrorist, told Newsy almost anyone can still come for weapons training today.  Those who make the trip learn to use a firearm and undergo medical and tactical training, the group's leader Stanislav Vorobyev said.

Vorobyev also said his group is working to unite the world's white nationalists, including those in the U.S.

"One thing that really worried me in the podcast when you were talking to RIM's leader was the fact that he intimated in your podcast that he maintained a relationship with Americans who saw the world in the same way as he did," Blazakis said.

Blazakis says Russia has a track record similar to other state sponsors of terror, like targeting Putin critic Alexander Litvinenko with highly radioactive polonium. He also pointed to Russia's failed attempt to assassinate other Putin enemies in the U.K. with chemical weapons.

The targets survived but a random person who came in contact with the military-grade nerve agent Novichuk was not so lucky.

"When that person handled it, that person died, so somebody actually did die — a U.K. national," Blazakis said.

Georgetown professor Daniel Byman agrees with those who believe that Russia is involved in terrorism but says current sanctions already put enormous pressure on the federation and cautions against applying the formal state sponsor of terrorism label.

"It's easy to add countries to the list, but often politically very, very difficult to remove them," Byman said. "Right now, what the United States and the world needs is diplomatic flexibility when it comes to Russia."

But now, even the U.S. government itself says the idea should be on the table. In a recent congressional hearing, a top State Department official argued to keep maximum economic pressure on Russia.

When a congressman asked if Russia is a state sponsor of terrorism, the State Department Undersecretary for Political Affairs Victoria Nuland said, "... we had not put it that way before, but I have to tell you that every day that goes by as they commit these egregious, brutal acts on the ground, it's something we should look at."