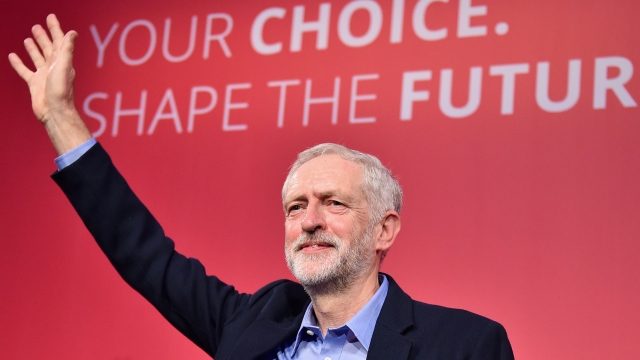 SMS
The UK's Opposition Leader Is On The Hot Seat After Brexit Vote
By Grant Suneson
By Grant Suneson
June 28, 2016
Labour leader Jeremy Corbyn is on the hot seat following the U.K.'s vote to leave the European Union. His party voted it had no confidence in him.
SHOW TRANSCRIPT

The massive shake-up caused by the U.K.'s historic vote to leave the European Union is still producing shockwaves in U.K. politics.

A vote among Labour members of Parliament showed the party's representatives have overwhelmingly lost faith in Corbyn. The group voted 172-40 to say they have no confidence in his leadership.

Corbyn was roundly criticized for not doing enough to encourage Labour voters during the EU referendum. Despite the vote and criticism, Corbyn has no plans to Corbexit his post.

He said, "I was democratically elected leader of our party for a new kind of politics by 60 percent of Labour members and supporters, and I will not betray them by resigning."

If someone from within the Labour Party wanted to force Corbyn out, a member of Parliament would need 51 parliamentary nominations. That would trigger a showdown between Corbyn and his challenger.

Though most of his cabinet resigned after the Brexit vote, Corbyn's allies maintain he’s still popular in the party and think he could win a challenge.

This video includes clips from BBC and Channel 4 and images from Getty Images.