The UK Is Finally Taking In More Syrian Refugees 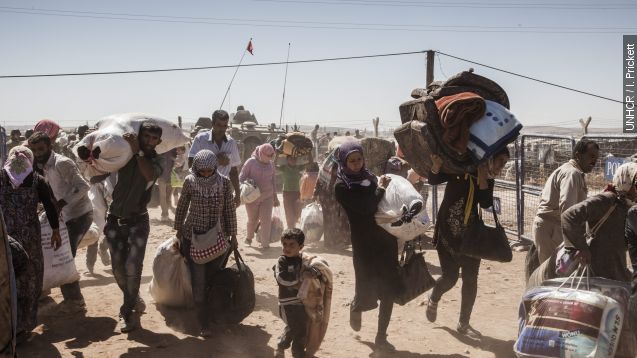 SMS
The UK Is Finally Taking In More Syrian Refugees
By Jake Godin
By Jake Godin
September 4, 2015
The United Kingdom is taking in more refugees from Syria, though how many is unconfirmed. Syria's neighbors still host the bulk of refugees.
SHOW TRANSCRIPT

The United Kingdom is finally taking in more refugees. Or at least it says it will. (Video via United Nations High Commissioner for Refugees)

"Today I can announce that we will do more, providing resettlement for thousands more Syrian refugees," David Cameron said during a press conference in Portugal on Friday.

British Prime Minister David Cameron confirmed Friday that the U.K. will act with its "head and its heart" by accepting more Syrian refugees.

While the U.K. hasn't said exactly how many refugees it plans to take in, the United Nations' refugee agency has put the number at 4,000.

Recent photos of a dead Syrian boy, washed up on a Turkish beach after failing to cross the Mediterranean, has galvanized support for accepting more refugees in Europe.

Tens of thousands of refugees are taking the same perilous journey as they flee conflict areas in Africa and the Middle East.

But Syria's neighbors have taken in the bulk of the refugees — Turkey alone has registered almost 2 million refugees. Lebanon, a little over 1 million.