The U.S. Just Told Everyone Its Plan To Take Back Mosul 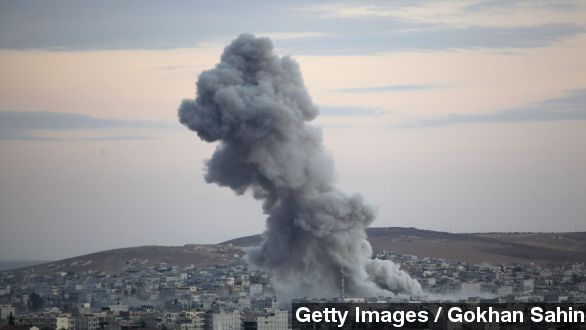 SMS
The U.S. Just Told Everyone Its Plan To Take Back Mosul
By Ben Levin
By Ben Levin
February 20, 2015
The U.S. Army is sharing its plan to take back the ISIS-held city of Mosul in what could be a turning point in the war against the extremist militia.
SHOW TRANSCRIPT

It's been a long winter in northern Iraq, where the terrorist militia ISIS still controls vast amounts of territory including Mosul, Iraq's second-largest city. (Video via Vice News)

Mosul fell in June of 2014, when the U.S.-trained Iraqi military collapsed and fled the city in the face of ISIS' well-trained and battle-hardened militants.

"Really that is no match for the kind of sophisticated weaponry that the Islamic State has," the BBC reported.

But spring is coming, and with it a U.S. plan using Iraqi forces to take back Mosul, which could be a major turning point in Iraq's fight against ISIS.

U.S. Central Command, which has carried out airstrikes against ISIS, explained in unusual detail how that would happen. The plan would combine an attack by about 20,000 Iraqis from the south with a northern force of a few thousand Kurdish fighters to overwhelm the estimated 1,000 to 2,000 ISIS fighters in the city. (Video via U.S. Central Command)

It sounds like a solid idea, but isn't the general idea to surprise the enemy?

Well, usually, but U.S. Central Command might be playing a deeper game, leaking the information to either intimidate the defenders of Mosul or give hope to the citizens still in the city. (Video via ITV)

NPR reported: "This might be psychological operations. You try to unsettle your enemy, and also give civilians time to leave the area. So there might be a little information operation going on here"

Psychological operations or not, the plan depends on the Iraqi army performing much better than they did last June.

"Troops were among those fleeing as hundreds of jihadists from the group overran the city and much of the surrounding province," ODN reported.

Veterans of the U.S. Army, which spent $25 billion training their Iraqi counterparts, explained to Al Jazeera that its quick collapse in Mosul was a result of a "leadership vacuum," corruption and many soldiers who were just in it for the paycheck.

So will anything be different this time? Gen. Jack Keane is unsure: "We truly do not know, and we won't know until this thing gets going."

The performance of the Iraqi army isn't the only question. Also unknown is whether U.S. advisers will be with Iraqi forces on the ground and whether the attack will come in April or May.