After Nine Decades, Is Our Partnership With Turkey Nearing A Break-Up? 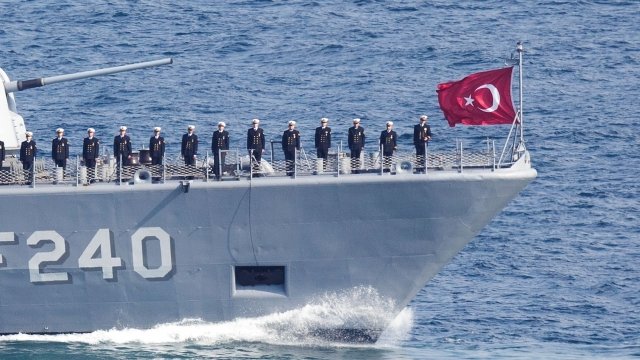 Turkey straddles East and West. It's the buffer between Asia and Europe. And strategically, it's crucial. For the United States especially. But things are complicated.

The relationship between the U.S. and modern Turkey dates back nine decades.

Then, Turkey was one of the first UN countries to send troops during the Korean War, which made an impression. Turkey was soon welcomed into NATO in 1952.

After the U.S., Turkey has the largest military in size of any NATO member. The US government calls Turkey "NATO's vital eastern anchor."

The Cold War is a prime example. In exchange for economic help and protection the US got to establish military bases throughout Turkey getting within 150 miles of the USSR.

The Incirlik airbase especially. It was the main hub for running missions during wars in Iraq and Afghanistan. And it’s been a launching pad for airstrikes targeting ISIS.

On the other hand Turkey doesn't like the fact that the United States has trained Kurdish fighters in Iraq and Syria. The government argues they’re linked to separatist groups within Turkey.

A particular concern for the United States is Turkish president Recep Tayyip Erdogan. He pulled Turkey out of years of instability but he's consolidated power, and, in 2014, took authoritarian measures arresting protesters and journalists. Still the Obama administration, while officially condemning a July 2016 coup attempt, declared that the United States was, "steadfast in its support of Turkey’s democratically-elected government."

Turkey actually blames some Americans and Turks living in America for inciting the coup. After a dispute over punishment, the Trump administration rolled out tough sanctions, causing Turkey’s economy to falter.

In 2018 Turkey strengthened ties with Russia another worrisome point. And a Pew study found 79 percent of Turkish people have an unfavorable view of the United States.

So relations with Turkey are strained, to say the least. But they continue to be an important democratic partner in a section of the world at risk of extremism and iron-fisted rulers.