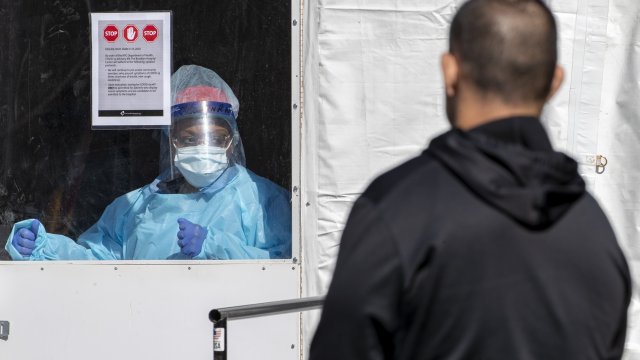 SMS
The U.S. Has More Coronavirus Cases Than Any Other Country
By Nathan Byrne
By Nathan Byrne
March 26, 2020
More than half the country's population will be under stay-at-home orders by the end of the week.
SHOW TRANSCRIPT

While the coronavirus task force gave its briefing Thursday, the U.S. overtook China, Italy and the rest of the world for the highest number of confirmed cases at 82,404.

As of Thursday evening, Johns Hopkins University had upped that number to roughly 83,800. China has 81,782 cases, and Italy has 80,589. The case count changes by the hour as testing becomes more widely available.

But President Trump continued to hint at a sooner-than-expected return to work for many Americans. In a letter to the nation's governors, he mentioned an easing of guidelines meant to enable state and local leaders to make "decisions about maintaining, increasing, or relaxing social distancing and other mitigation measures they have put in place." He has also put a focus on framing the U.S.' coronavirus death toll as relatively low.

In the task force briefing Thursday, the president said: "The people that actually die, that percentage is a much lower percentage than I ever thought. That's one of the reasons I say, 'Look, we're going to beat this and we're going to get back to work.'"

More than 1,200 people have died from the coronavirus in the U.S. More than half the country's population will be under stay-at-home orders by the end of the week, with 22 states having issued those proclamations.