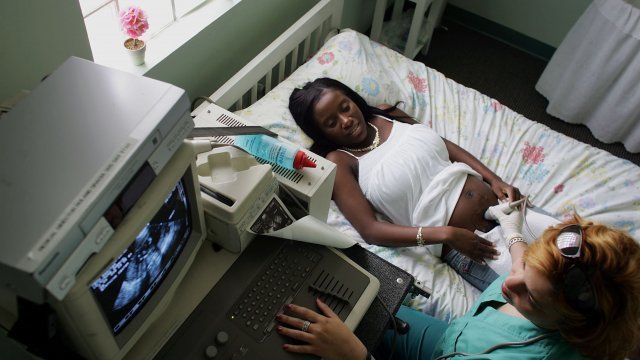 Women in rural communities are less likely to get the maternal health care they need while pregnant.

Giving birth in the United States can be dangerous.

In fact, a newly released USA Today investigation found it's the most dangerous place in the developed world to give birth.

While other developed countries have experienced declines in maternal deaths over the last 25 years, the United States has seen a drastic increase.

Though the majority of women give birth safely, approximately 700 women across the U.S. die each year as a result of pregnancy or pregnancy-related complications.

Obstetrician Gynecologists like Dr. Barbara Levy say many of these deaths are preventable with correct prenatal care through a specialist.

"There are primary care physicians who have training, most don't. There are a lot changes that happen to our bodies during pregnancy. It takes a little bit of special training to understand," Levy said.

Women typically see their OB-GYN about once a month at the beginning of pregnancy-- and those visits only get more frequent as the pregnancy progresses.

"You don't wanna scare people with the bad things that can happen but bad things do happen and we want to be prepared," she added.

Regular visits to a maternal care physician can be a struggle to women in rural communities.  The American Congress of Obstetricians and Gynecologists says one million babies are born to mothers who did not receive adequate prenatal care every year.

In Wisconsin alone, a third of women don't have access to a specialist.

"26 of 72 countries don't have an OBGYN working in that community," says Democratic Senator Tammy Baldwin. "You have to travel great distances, sometimes people forgo care they need. I can't tell you how many stories I've heard of women in labor driving an hour and a half to give birth. These are not good circumstances."

With 2,340,007 women in Wisconsin and only 556 OBGYNs, Senator Tammy Baldwin says there isn't enough care to go around. She wants the National Health Service Corps to specifically target maternity care resources to lacking communities.

"This is right now generalized review which areas are under served but it doesn't look at maternity care," Baldwin says. "To improve outcomes in the united states we've really got to look at the whole both prenatal and postnatal care and delivery.

Her bill,co-sponsored by Republican Senator Lisa Murkowski of Alaska, would direct the NHSC to do just that.

Both the Senators and Dr. Levy agree negative outcomes could be prevented with more access.

Dr. Levy says there needs to be a system to put doctors in these under served communities while also supporting their careers.

"If there's a place where there's not a lot of pregnant women, trying to maintain a practice is challenging. Many of them have closed hospitals that do OB care because maternity care doesn't pay well for the hospital and keeping a workforce of nurses who are trained to manage labor is really tough. How do they keep up their skills if their volume is really low?

They need to be in a place where they know how to respond quickly in an emergency and if they're only doing one delivery a day they may never see that emergency for a year. We need them to be practiced."

Both Dr. Levy and Senator Baldwin say they're disappointed at the disparity between the United States and other countries.With the Centers for Disease Control estimating 60 percent of pregnancy related deaths each year are preventable-- the Senators are eager to make progress in protecting mothers -- and they say this bill is a good start.

The bill has not yet been passed out of committee in the Senate.

The House passed a companion bill in January 2017.