The U.K. Perspective On The Jan. 6 Insurrection 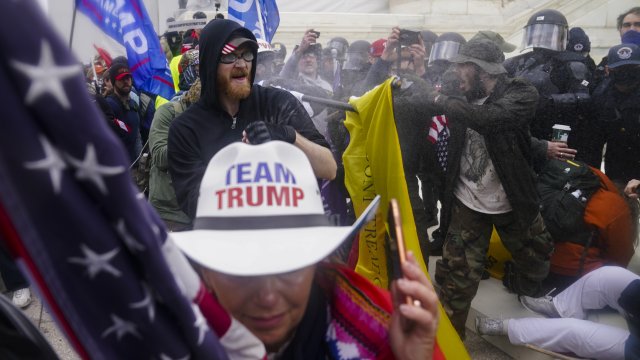 People around the world watched American democracy appear to teeter on the brink of collapse on Jan. 6, 2021.

In Britain and Ireland – people were glued to the news.

"The world is watching this in just utter disbelief – no matter what you think of President Trump – this will be his lasting legacy – this will be what people remember," Hilary McGann of Clare, Ireland said.

"It makes America look weak to the rest of the world," Kristian Lafferty of Reading, England said. "It’s more like the scene you’d expect to see in a third world country not a modern western democracy."

"Stand back and stand by says the president," Matt Jowett Baker of Hull, England said. "The president. What on earth do people expect? Now you’ve got a broken America with people literally on the brink of civil war. The beacon of democracy around the world? Hard to push that line now."

Fast forward 12 months and those images still reverberate, still fresh in the memories of many.

The charged political atmosphere in America crossed the pond, and it was sometimes palpable outside the American embassy in central London. At times, the U.K. felt like an extension of the U.S. with much of the animosity directed towards President Donald Trump.

When Donald Trump visited the U.K. in 2019, 75,000 protesters gathered in central London to show their anger over his visit.

But it’s the Capitol riots that grabbed the globe’s attention.

"I was shocked at the behavior of the American citizens, certainly," James Stapley of London, England said. "I knew was a right wing element to America but I genuinely didn’t realize it was as vicious as it turned out to be. I was surprised."

"I think people were already thinking anything’s possible," Liz Myers of London, Englad said. "Certainly people I was in contact with were shocked, but they weren’t surprised, let’s put it that way."

“I was quite shocked that the American civilians would go to that extent to actually storm the head of their country’s Capitol – that was quite surprising," Leon Clarke of London, Englad said.

So, has the attack on the Capitol changed the way world looks at America?

“I think that it inhibits Americas ability to project power abroad, so we saw that with January 6th," said Dr. Thomas Gift, the director of U.S. politics at University College London. "We’ve also seen it with America’s very high profile and botched withdrawal from Afghanistan. All of these things add up to perception that the United States isn’t the power that it once was.”