The U.K. Labour Party's New Leader Is A Radical Socialist 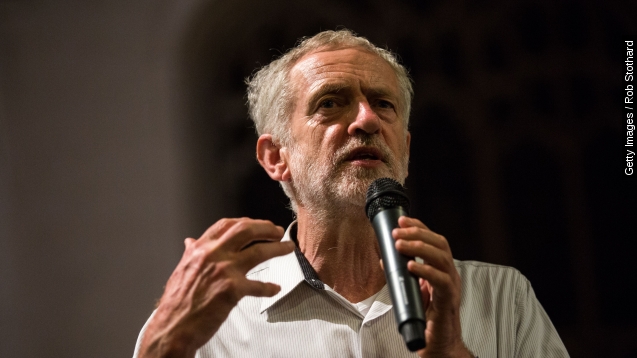 SMS
The U.K. Labour Party's New Leader Is A Radical Socialist
By Matt Picht
By Matt Picht
September 12, 2015
Jeremy Corbyn was supposed to be the far-left's long-shot protest candidate. Instead, he's just been elected leader of the Labour Party.
SHOW TRANSCRIPT

Britain's major opposition party just elected a radical socialist as its new leader. If you haven't been paying attention to U.K. politics, now might be the time to start.

A wildly successful grassroots campaign has propelled unassuming Islington MP Jeremy Corbyn to the head of the U.K. Labour Party. And now everyone's trying to figure out what will happen next.

Corbyn's first task will be wrangling members of his own party. Many Labour MPs don't subscribe to Corbyn's far-left policy platform, and his own legacy of rebelling against the party line could make it hard for him to win support.

All-out defections are unlikely, but at the very least the Labour Party's power structure will probably undergo a seismic shift. Corbyn will have to find a new crop of shadow ministers to form his opposition, and there are already hints centrist Labour MPs might stake out their own faction within the party.

After Corbyn sorts out members of his own party, he faces the relatively straightforward task of opposing David Cameron and the Conservative Party in Parliament. Since the two men are polar opposites of each other, this should make for some fun exchanges.

Since David Cameron commands a slim majority in Parliament, Corbyn's actual power as Labour leader will be limited — especially without the full backing of his own party. Still, Corbyn could at least trip Cameron up on issues like intervention in Syria and increased austerity measures.

Perhaps the more important question is where Labour will be when the next general election rolls around in five years. Corbyn supporters hope five years of staunch Labour opposition to Conservative-led austerity cuts will win them enough public support to triumph in an election. (Video via Sky News)