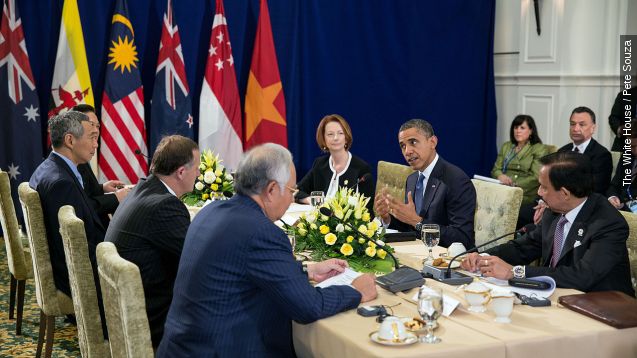 It looks like the White House might get to flex its recently won trade authority in Congress after all. Negotiators from the U.S. and 11 other nations agreed to a deal on the massive, secretive, 12-nation trade agreement known as the Trans-Pacific Partnership, or TPP.

The deal, which aims to create an open trade zone between 12 countries covering 40 percent of the world's economy, has been in the works since 2008. Negotiations over the fine details delayed the agreement's completion for years.

One of the last hurdles was a dispute between Australia and the U.S. over how long pharmaceutical companies can exclusively sell new biotech drugs.

President Obama still has to get the agreement past Congress, but that's a less daunting task than it sounds; the administration's freshly acquired trade promotion authority limits Congress' involvement to a simple yes-or-no vote, essentially without changing it.

Supporters of the agreement, including President Obama and many Republicans, argue the deal provides economic benefits by bulldozing trade barriers and establishing common rules across a wide region of the global economy.

But detractors — liberal Democrats among them — say toxic provisions on labor laws, intellectual property, country-investor dispute arbitration and other issues make the TPP too harmful to be worth it.

To complicate matters even further, the TPP is going before Congress during an election year. That could make Republicans reluctant to hand Obama a victory — or Democrats uneasy about handing him a defeat.