The Top 10 Deadliest US Earthquakes 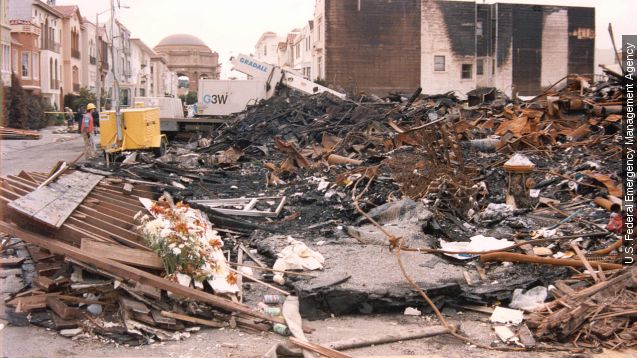 Catastrophic earthquakes are a rare but devastating occurrence in the U.S. Here are the top ten most lethal earthquakes the U.S. has ever suffered.

Earthquake deaths are mercifully rare in the U.S. these days, but the devastation these natural disasters can wreak still captivates us. Courtesy of the U.S. Geological Survey, here's a look at the top 10 deadliest earthquakes to affect the U.S.

The most recent earthquake on the list, the Northridge earthquake occurred on a previously unmapped fault line, causing massive damage with little warning. The earthquake sparked a new push for better earthquake prediction in the region; Southern California has gone from seven seismic monitoring stations to over 400.

One of the most damaging quakes the East Coast has experienced, the Charleston earthquake in South Carolina came as a shock for the usually stable region. An example of relatively rare intraplate earthquake, the quake left almost no buildings undamaged.

The largest earthquake ever recorded happened in 1960 off the coast of Chile, where it killed thousands and caused millions of dollars in damages. But tsunamis generated from the quake managed to affect regions around the world — including Hawaii and the U.S. West Coast.

The 1989 World Series was interrupted by this California quake, which caused widespread damage across the Bay Area. The most disastrous loss of life came when a section of the Nimitz freeway collapsed on itself, killing 42 people and injuring many others.

This disaster leveled both the Olive View Medical Center and the regional veterans' hospital in the San Fernando Valley, resulting in major losses of life. In the aftermath, California strengthened its building codes and passed a new zoning law to mitigate future earthquake damage in the region.

Hawaii's largest earthquake toppled almost every wood and stone structure in nearby villages and triggered lethal tidal waves and landslides, which killed 77 people.

At magnitude 9.2, the Great Alaska earthquake is the second largest earthquake ever recorded. It also caused a devastating tsunami which wrecked many towns along the Gulf of Alaska, including Anchorage.

The 1946 earthquake off the coast of Unimak Island didn't directly cause much damage, but triggered a massive tsunami which swept away an Alaskan lighthouse and severely damaged the Hawaiian city of Hilo.

The most infamous example was the San Francisco earthquake of 1906, which toppled buildings and sparked massive fires across the region. The catastrophe leveled about 80 percent of the city, and it's estimated at least 3,000 people died.

Earthquake prediction and preparedness have advanced by light-years since then, but individual preparedness is crucial, too. If you live in a tectonic hot zone, it's important to establish a plan, prepare some emergency supplies and participate in an earthquake drill or two.