The 'Thurmond Rule' Isn't A Perfect Comparison In Replacing Scalia 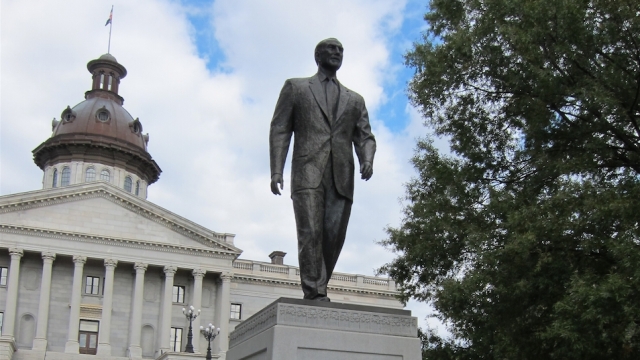 SMS
The 'Thurmond Rule' Isn't A Perfect Comparison In Replacing Scalia
By Kate Grumke
By Kate Grumke
February 18, 2016
The "Thurmond Rule" is the unofficial guideline that the Senate shouldn't confirm judicial nominees in the months before a presidential election.
SHOW TRANSCRIPT

While covering the primaries in South Carolina, we came across a Strom Thurmond statue at the statehouse. That name may sound familiar. It's been thrown around in the days following Supreme Court Justice Antonin Scalia's death.

Many Democrats have named Justice Robert Kennedy's confirmation at the end of Ronald Reagan's second term as an example that could be relevant to the death of Scalia and ensuing political turmoil.

But there are also examples that would seem to back Senate Republicans' argument that they can wait until the next president.

One example comes from the end of Lyndon B. Johnson's time in office. In June of 1968, he nominated Abe Fortas — who was already a Supreme Court justice — to take on the role of chief justice for Earl Warren. The Senate at the time filibustered the move, and in the end, Warren stayed on as chief justice until the Nixon administration.

That's an important distinction. That filibuster didn't leave the court with eight justices; Warren just stayed in his position longer. So it's not entirely comparable to this situation.