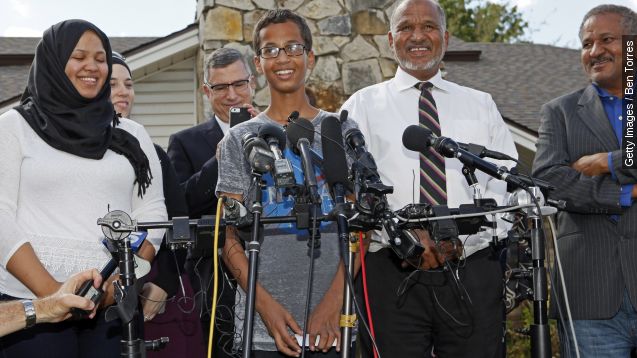 SMS
Ahmed Mohamed Isn't Going Back To Public School
By Jake Godin
By Jake Godin
September 17, 2015
The high school student in Texas who was accused of bringing a bomb into his school when he instead had a clock is switching schools.
SHOW TRANSCRIPT

Ahmed Mohamed — the Texas teen who made the clock that was mistaken for a bomb — said he's thinking about switching schools. (Video via ABC)

"I really want to go to MIT and ... I'm thinking about transferring schools from McArthur to any other school," Ahmed said during a press conference.

The 14-year-old high school student was arrested Monday after he brought a homemade clock to school. Teachers mistook the simple invention for a bomb.

The news went viral, and soon Ahmed had everyone from the founder of Facebook to the president of the United States showing their support for the teen.

Even his dream school, MIT, asked him to visit in a surprise invitation during an interview with MSNBC.

"If there's any possibility that you can come visit us at MIT, I would love to give you a tour of the Center for Theoretical Physics and the Kavli Institute for Astrophysics," said Dr. Chanda Prescod-Weinstein.

No charges against Ahmed will be filed. His three-day school suspension ends Thursday.