Pop Quiz: What Surprising Things Are We Learning From True Crime? 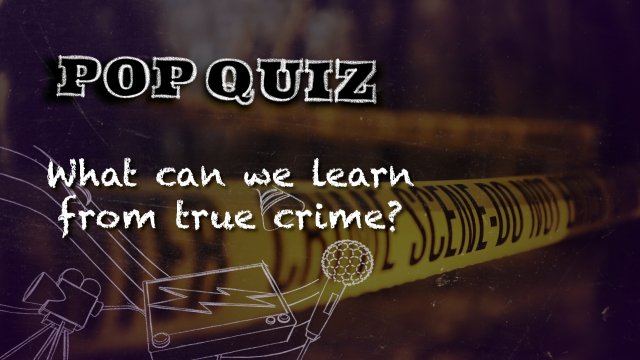 How do you feel about true crime stories? Many people can't get enough,and others just get the creeps.

The true crime genre has seen a boom over the past decade, driven by the rise of true crime podcasts like "Serial," "My Favorite Murder" and "Dirty John." It’s now dominating much of the TV landscape, from documentary series like "Making a Murderer," to scripted adaptations like "The Girl from Plainville."

The genre is a peculiar mix of journalism, documentary and sensational entertainment – for better or worse.

Newsy's "In The Loop" is putting the true crime craze under the microscope to see what it says about consumers and how we think about crime, entertainment and justice. In this segment of "Pop Quiz," we try to answer: what can we learn from true crime? And that answer is gonna take us from the world of social psychology, to forensic labs, to messy Netflix lawsuits. Are you ready?

Over the past few years, research has shown women in particular have been drawn to the true crime genre, which at first might seem surprising, since a lot of these stories focus on female victims.

"Women want to read about what was in the killer's background that caused him to kill or what set him off," said Amanda Vicary, associate professor of psychology at Illinois Wesleyan University. "What red flags should I look for? They also like to read about stories where the woman used some sort of escape trick to to make it out alive, right? Somehow use something they learned on the internet or something to outwit their attacker, and when I step back and kind of look at these together, I thought, 'Well, all of these are clearly related to survival, right?'"

Vicary also noted that while true crime might genuinely be helpful in some ways, it could be misleading in others.

"I think what's happening is that the media and the podcast and the two are focusing on the rare or unusual crimes, right?" Vicary said. "These sort of crimes, someone being kidnapped off the street or someone has broken into your house and that, these are more likely to happen to women. So men are actually more likely to be killed in some sort of violence, but that's often things like shooting or gang violence or something like that. Those don't get covered in a podcast that much."

Despite the genre's focus on female victims, the U.N. reports that 81% of homicides recorded globally are men. Women are also far more likely to be killed by a partner or family member than a stranger. Also, the rates of children being kidnapped are incredibly low in the U.S. at less than 350 a year on average.

The somewhat skewed understanding of crime goes beyond what women may be taking away from these stories. It can impact real court cases and jury selection. There is also the infamous "CSI effect," which refers to the idea that jurors may be expecting more evidence, like they see on TV. While experts disagree on how tangible the CSI effect is, the myth is enough to have an impact. For example, it seems to drive some investigators to do extra tests like collecting extra DNA or samples – even if they don’t actually contribute to the case.

The idea is that they know the jury is expecting impressive forensic evidence, so quite a bit of money is wasted to give the appearance of forensic evidence. The impact doesn’t stop there — true crime has also had a huge effect on the investigation outcomes.

The podcast "Serial" brought international attention to the murder conviction of Adnan Syed, and an HBO series followed years later. Some evidence from the podcast even made its way to trial, and later, the showrunner on the series "The Case Of Adnan Syed" even uncovered new evidence while investigating the case.

There is another side to this though: Often it's forgotten these are real people who are the victims, culprits and suspects, and the attention they get from true crime stories can be severely damaging. The family of the victim in Syed's case, Hae Min Lee, stated the podcast “reopened wounds” and “it remains hard to see so many run to defend someone who committed a horrible crime.”

In another infamous example, Netflix’s hit series "Making a Murderer" ran into hot water after clearly portraying police officer Andrew Colburn as corrupt and part of the alleged cover-up at the heart of the story. He would later sue Netflix for defamation after he claims fans of the show harassed him and his family so much they built a safety bunker at their home. A number of people in the town have also complained about how the series has impacted them.

"A John Doe or Jane Doe body that has been recovered, that they've been able to put the pieces together and link it to a missing person — there have definitely been cases of that," Vicary said. "I've also heard cases of people who the internet has decided as a suspect in a case, and that person being harassed by random people at the internet, calling them on their phone or driving by their house or something like that."

So it's clear true crime can teach things about survival, about ourselves and about how we think about crime. But if we take a step back, the rise of true crime can also tell us something about our current cultural moment.

The genre was dominated in the 80s and 90s by glitzy and sensational cases like the JonBenet Ramsey case or by celebrities like O.J. Simpson.

Today, many of these true crime stories focus on ways the justice system has failed  marginalized people or groups.

"It seems like in a lot of the fictional shows, they're the good guys, right?" Vicary said. "The police and detectives are the good guys. The prosecutors are the good guys; they're putting the people away; they almost always get it right. I've seen a shift in podcast in that and shows recently to this area of wrongful convictions. I think people are really into that. It really strikes, I think, kind of a social justice nerve in people along with the unsolved mystery element of it."

All of this goes to show that as much as true crime influences our own perceptions of crime and safety, true crime has equally shaped by us.