The Supreme Court Heads Back Into The Courtroom 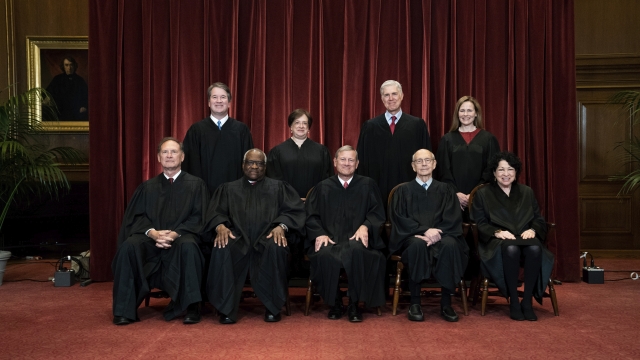 The Supreme Court will kick off oral arguments for its new term today, and justices will be physically back in the courtroom for the first time in well over a year.

Newsy sat down with Amy Howe, the co-founder of SCOTUSblog, to talk through some of the big cases on the docket this year. One of the biggest of the first few weeks — gun rights.

"In November, the Supreme Court's going to hear oral arguments, in a case called New York State Rifle and Pistol Association v. Bruen," Howe said. "This is a challenge to New York State's scheme for people who want a license to carry a handgun outside of their home. … So in this case, it's going to address whether or not there's more than a right to have a gun in your home. New York State and several other states, particularly in the Northeast, have this licensing scheme that says if you want a license to have to carry a gun outside of the home, you need to show a special need for it."

Also this term, the court will take on one of the biggest national debates — whether women have a fundamental right to have an abortion.

"The Mississippi abortion case is a really significant one," Howe said. "This is a case in which Mississippi has asked the Supreme Court to overrule Roe v. Wade, and many of your viewers may remember during the 2016 campaign, President Trump promised to appoint justices who would overrule Roe. And so with three appointees — Neil Gorsuch, Brett Kavanaugh and Amy Coney Barrett — people who supported the president, people who oppose abortion, are really looking to the Supreme Court to say, 'OK, are you going to do it?'"

Another big case will address whether public school funds can be used for religious institutions.

"It's a case out of Maine, which has kind of an unusual system," Howe said. "For funding secondary schools in some of the more rural areas of the state, school districts can say, 'We will pay for you to it, we're not going to run our own secondary school, we're going to pay for students to attend another public high school, we'll pay for them to attend a private school that we choose, or we will provide money for parents to send their children to a private school. And so this case was filed by parents who wanted to send their children to a Christian school. And the school district said 'We're not going to provide money for you to send your children to those schools, because they provide religious instruction.'"

Both the Mississippi abortion case and the Maine school case are scheduled for oral arguments in early December.