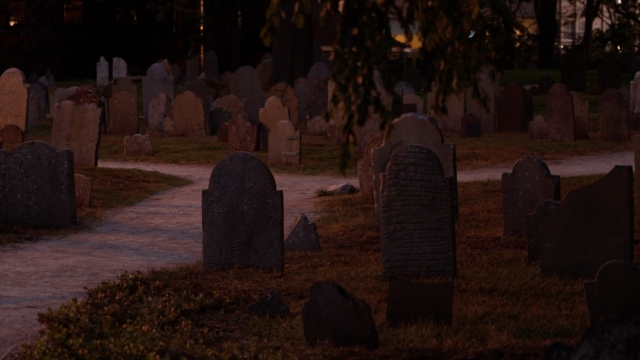 Mass hysteria and bloodbaths have left a stain on Salem, Massachusetts.

"It's crazy the stories that came out of that. People having out-of -body spirits visiting them," Pam Krahmer, a descendant of a convicted Salem witch, said.

Now, over three centuries later, the ramifications of the Salem Witch Trials can still be felt on the banks of Massachusetts Bay.

"Any place that has had a mass killing or murder usually becomes very haunted," witch and clairsentient Danielle Tracey said.

"What happened in Salem had nothing to do with witchcraft," Salem witch Leanne Marrama said. "I am a witch, and I am a practicing witch. I'm a priestess. I run a coven, which we come together, we celebrate the seasons, we celebrate our successes, we work magic."

Between 1692 and 1693, the Salem Witch Trials found at least 19 people guilty of crimes relating to witchcraft. The punishment was death by hanging.

In total, over 200 people were accused of being a witch.

Krahmer is a descendant of two women who were publicly hanged after being accused of practicing witchcraft.

For the very first time, Krahmer visited the site where her ancestors died.

"These were Puritan women. Some of them started acting out of character ... and they said let's blame it on these other people," she said.

Marrama admits she's a witch, which is a statement akin to a death sentence back in 1692.

"Witchcraft has been associated long with women that hag, the one who curses, the one who seduces a man," she said. "That's — once again — the patriarchy, the male superior trying to put down woman's natural gifts."

AXEL TURCIOS: "What is witchcraft?"

LEANNE MARRAMA: "Witchcraft is an old religion made new. It is also a practice many people do. We are people of the old gods, and we connect with nature on a regular basis. We are the ones who bring light and magic to almost like a dim, sad world."

TURCIOS: "Do you cast spells?"

MARRAMA: "Yes, of course, I cast spells. I love casting spells. Spells are another form of prayer."

Tracey says she is a witch with special gifts.

"I am a clairsentient," she said. "So, I feel things. I'm an empath and I'm also a claircognizant."

Tracey believes that the bloodstained Salem grounds are a fulcrum of the paranormal.

She said, "Salem is definitely one of the most haunted places in the United States, I'd say."

The Old Burying Point is one of the oldest cemeteries in the U.S. and the oldest in the city of Salem. And it's where Judge John Hawthorne — one of the most influential, hated and unrepented judges involved in the Salem Witch Trials — is buried.

At that time, the bodies of some of the people who were convicted of witchcraft were dumped around the cemetery because it was believed to be unlucky to touch them and it was also unlawful, so they never received a proper burial.

"Other judges, like Judge Saul, were saying that they were sorry for what they had done because they realized the victims were all innocent. Judge Hawthorne, the hanging judge, never apologized," Kara McLaughlin, the executive director of The House of the Seven Gables, said.

McLaughlin says The House of the Seven Gables has a direct attachment to the Salem Witch Trials.

The house rose to fame after Salem-born Nathaniel Hawthorne wrote his novel with the same name.

"Hawthorne felt this burden of guilt. His great-great-grandfather had been one of the judges in the Salem Witch Trials," McLaughlin said.

A house with a dark past, believed by many to be haunted, but McLaughlin thinks otherwise.

"I do not believe it's haunted," she said. "I've spent a lot of time in that house and I've never had any experiences. I mean there are some people that have said they have felt things, but there's really no evidence of it being haunted."

The Proctor's Ledge Memorial is dedicated to at least 19 people who were executed — men and women — after being convicted of witchcraft. It's the site where scholars have concluded those executions happened in 1692. And in the woods nearby is where they were hanged in what's been described as one of the first miscarriages of justice in American history.

"What happened here in Salem is what created the path to our modern legal system," McLaughlin said. "Innocent people being convicted and killed for crimes they didn't commit. That's a big deal."

History has revealed the persecutions were all about money, land and power.

"Powerful people wanting something that other people had. And then it became a hysteria," McLaughlin said. "They were looking to the people that were powerful at the time. I think that they believed those people. If they're the ones saying it, then it must be true, you know, they didn't question authority."

A town wrapped up in greed and misunderstanding. Perhaps the truth is more frightening than the legend.