The St. Louis Cardinals Are Limping Into The Playoffs 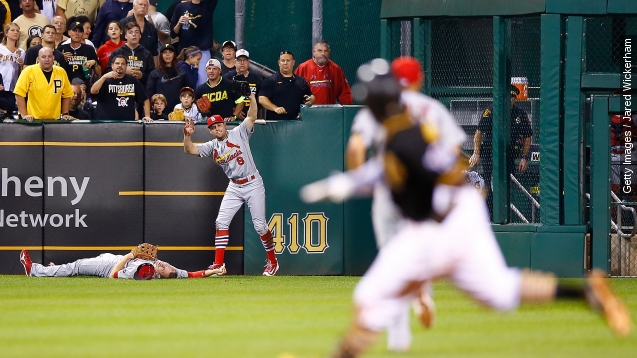 Not only are the St. Louis Cardinals baseball's best team right now, they're also playing in the league's toughest division. And they're winning despite an ever-growing list of injuries.

Rookie outfielder Stephen Piscotty suffered a terrifying injury Monday night when his head collided with the knee of center fielder Peter Borjous. Piscotty was taken off on a stretcher and underwent tests at the hospital. He's been diagnosed with a head contusion.

Even though the entire Cardinals organization let out a sigh of relief that Piscotty wasn't more seriously hurt, his absence presents another problem for the roster.

And the statuses of outfielders Matt Holliday, Randal Grichuk, first baseman Matt Adams and pitcher Adam Wainwright all appear to be a bit murky. Holliday and Adams missed significant time with leg injuries, Grichuk with an elbow injury and Wainwright with an Achilles injury.

Holliday, Grichuk and Adams are back, and Wainwright's working to pitch out of the bullpen in the post season. But how reliable will these guys be?

Arguably, the Cardinals offense has seen the effects of these losses, but they keep chugging along to a likely 100-win season. And that, as an ESPN writer notes, is impressive:

"While the Nationals seemed to use their injury problems as an excuse, the Cardinals simply rolled along and relied on their organizational depth. In St. Louis, you don't whine; you just win. ... Do you want to bet against them? I sure don't," David Schoenfield writes.

If the Cardinals are able to hold onto their NL Central lead, which seems probable, they'll face off against the wild-card winner in the first round of postseason play.