The Space Station's Newest Room Will Blow Up Like A Balloon 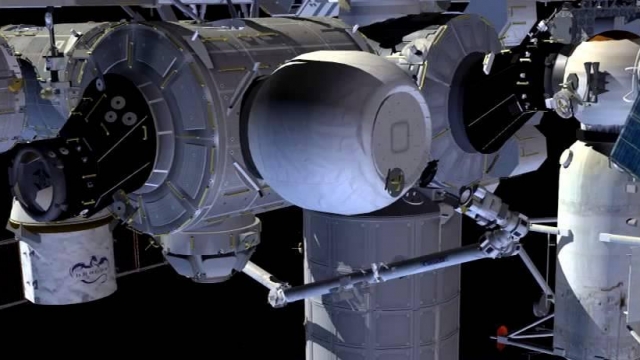 SMS
The Space Station's Newest Room Will Blow Up Like A Balloon
By Evan Thomas
By Evan Thomas
April 2, 2016
Inflatable modules are a potentially inexpensive way to build new habitable structures in space.
SHOW TRANSCRIPT

The International Space Station is set to get a new room for the first time in five years.

The Bigelow Expandable Activity Module, or BEAM, blows up like a balloon after it's attached to the station.

And it's soft-sided like a balloon, too. But Bigelow Aerospace has built in layers of micrometeoroid protection it says will stop orbital debris just as effectively as the rigid modules that make up the rest of the station.

Bigelow will be testing BEAM for a while before any astronauts start living in a bubble. The ISS crew will use it as storage while Bigelow checks its durability and its resistance to radiation.

BEAM will hitch a ride aboard SpaceX's CRS-8 supply mission. Before it's inflated, it's about 10 times smaller.

This makes inflatable habitats an attractive option for space construction. The smaller and lighter something is, the cheaper it is to get into orbit.

Bigelow plans to eventually move on to larger versions, which could see use in orbital science or long-term missions to the moon or Mars.

This video includes clips from NASA, SpaceX and Bigelow Aerospace and images from NASA.