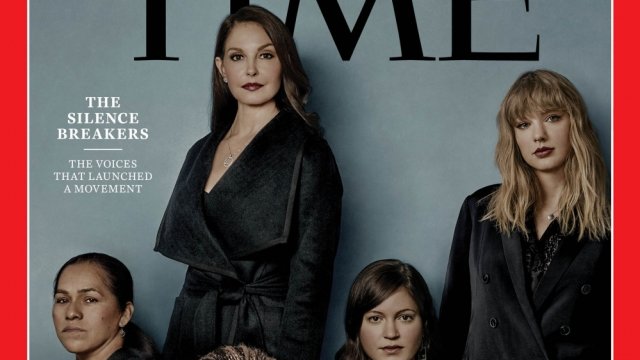 SMS
Time Honors 'The Silence Breakers' As Its 2017 Person Of The Year
By Katherine Biek
By Katherine Biek
December 6, 2017
The magazine honored the group of people who've come forward this year with accusations of sexual harassment and assault.
SHOW TRANSCRIPT

Time's 2017 Person of the Year isn't an individual. Instead, it's a group Time is calling "The Silence Breakers" — people who've broken their silence on sexual harassment and assault over the past year.

"I felt that if I can speak out — maybe if I just stand up, then someone else will stand up with me," Dana Lewis, a hotel hospitality coordinator, told Time.

In October, Judd was one of the first stars to go on the record with sexual misconduct allegations against film producer Harvey Weinstein.

And in August, a federal jury ruled a former radio DJ assaulted Swift during a meet-and-greet in 2013.

Time has given out what is now known as its Person of the Year Award since 1927, when the magazine honored aviator Charles Lindbergh.

Last year's winner was Donald Trump, who had just won the 2016 presidential election.