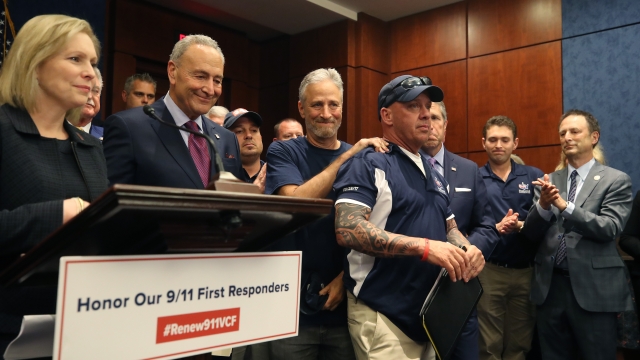 President Trump is expected to sign it on Friday.

The Senate has passed a bill ensuring the compensation fund for victims of the Sept. 11 terror attacks will never run out of money. The money helps victims and first responders suffering from illnesses linked to 9/11.

Tuesday's 97-2 vote authorized the fund to accept claims through 2090 and will allow those who are qualified to receive funds through 2092.

The bill is called the Never Forget the Heroes Act. It specifically names first responder and former New York police Det. Luis Alvarez, who died from cancer just days after pleading with House members to pass the measure.

The House overwhelmingly passed it earlier this month in a 402-12 vote.

Had lawmakers not approved the bill, the fund would have had to stop accepting claims in December 2020.

The Senate voted down two proposed amendments to the bill by Republican Sens. Mike Lee and Rand Paul. Paul had suggested requiring offsets for the money spent on the fund, and Lee suggested restricting the authorization to 10 years.

Officials estimate that the number of deaths caused by 9/11-linked illnesses will surpass the nearly 3,000 people who were killed after the terror attacks. The Never Forget the Heroes Act would extend the program for seven more decades, which is expected to cover everyone who was exposed to toxic debris in the attacks.

Democratic Sen. Kirsten Gillibrand supported the bill and said it should not have taken this long to pass it. She said, "The eyes of the nation are looking at this chamber today to see if we finally stand by our 9/11 heroes for the rest of their lives."

Victims' advocate John Feal, a former construction worker, was injured while working at Ground Zero. He's spent years lobbying for 9/11 health care programs. After the bill passed, he said: "We're not celebrating. We're not spiking a football. Too many people are dying or have died."

Comedian Jon Stewart has also been a vocal advocate for the fund and said working with 9/11 first responders was the honor of his life.

"We can never repay all the 9/11 community has done for our country, but we can stop penalizing them and today is that day."

The bill is now headed to President Donald Trump's desk. He is expected to sign it on Friday.