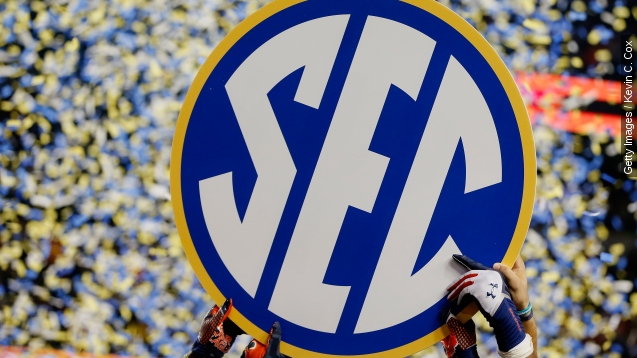 SMS
SEC Football Might Have Lost Its Gridiron Throne
By Carter Woodiel
By Carter Woodiel
September 27, 2015
The Southeastern Conference, long trumpeted by fans as the best college football has to offer, is off to a rough start this year. Is it still No. 1?
SHOW TRANSCRIPT

College football fans have been hearing it for years now: "The Southeastern Conference is the best conference in college football, hands down." Driven by a streak of seven straight national titles from 2006 to 2012, and decades of tradition, the narrative is hardly ever drowned out. (Video via ESPN)

But this year, we're four weeks into the college football season and several SEC teams with high hopes have already been brought back down to earth, and quickly.

Take Auburn, considered by many to be a national title contender. The Tigers narrowly escaped defeat in Week 2 against Jacksonville State, a team that doesn't even play in college football’s top division. That was followed up by a 24-point drubbing at LSU and a disappointing home loss to Mississippi State.

And it’s not just Auburn. Arkansas started the season ranked 18th in the country by the Associated Press. Since then, the team has lost to Toledo and Texas Tech on its way to a 1-3 start.

On top of that, previously ranked Missouri was taken to the limit by Arkansas State and UConn before falling to Kentucky on Saturday, and Tennessee blew a couple of late leads in losses to Oklahoma and Florida.

That isn’t to say the SEC is all of a sudden an FBS minnow. The top of the conference is as good as ever, with Ole Miss, Georgia, and LSU all boasting an AP top 10 record and Alabama and Texas A&M not far behind.

But the conference’s lack of depth could be bringing it back to earth, and giving another conference the chance to snatch up the title of "best in the land." (Videos via AL.com, WAIT)

It could go to the Pac-12. The conference out west has five AP top-25 teams, including number ten Utah and number 7 UCLA, both of whom are undefeated and are coming off blowout wins on the road.

There’s still a lot of football to be played this year, and the SEC won’t go out without a fight. But fans down south should be a little worried. Their favorite conference is in danger of being dethroned.