The Search Area For MH370 Might Soon Be Doubled 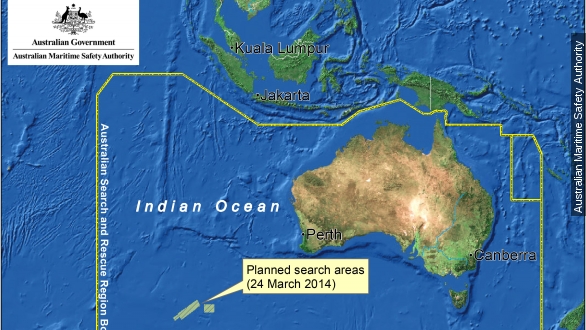 SMS
The Search Area For MH370 Might Soon Be Doubled
By Matt Moreno
By Matt Moreno
April 16, 2015
Search officials announced Thursday if no trace of the plane shows up soon, they will expand the search area to more than 46,000 square miles.
SHOW TRANSCRIPT

There's still no trace of Malaysia Airlines Flight 370 and officials may soon be doubling their search area.

In a statement released Thursday from Malaysian, Australian and Chinese officials, it was announced the current search area of about 23,000 square miles could soon be expanded to cover some 46,000 square miles total.

"We're confident we're searching in the right area. We're confident we have the very best available equipment. For that reason, we are optimistic that we will be able to recover the aircraft," Australia's Deputy Prime Minister Warren Truss said.

It's been over a year since the plane carrying 239 people has gone missing and officials believe it's likely somewhere off the coast of Western Australia. It's just a matter of where.

The search for survivors has long been called off, but officials say they're committed to finding the plane so families of the victims can have closure.

Thursday's news could be a bit surprising as it comes more than a month after Australia's Deputy Prime Minister Warren Truss made this comment:

"We can't go on forever and eventually a judgement will have to be made."

This sparked rumors that authorities were considering calling off the search for the missing plane relatively soon. Although Malaysian authorities have denied that's the current case.

"To my knowledge, there is no decision that has been made by our government to call off the search. ... The search will be scaled down, but we will continue with the search," Malaysia's Armed Forces chief General Zulkifeli Mohd Zin said.

Thursday's statement says once the current search area of 46,000 square miles is completed, "all high probability search areas would have been covered." Officials say, due to upcoming winter weather, it could take up to a year for a complete search of the expanded area.