From Barbers To Dentists: Why There's Different Insurance For Teeth 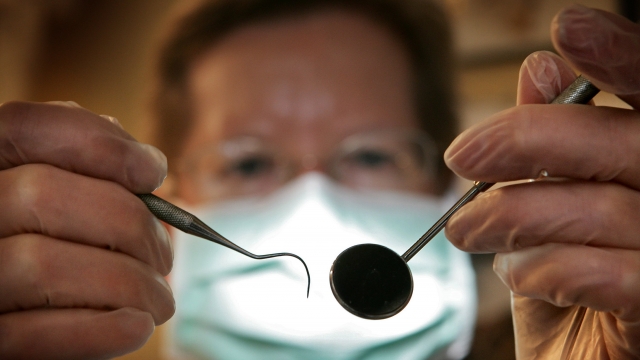 Dentists have had to prove their worth in the US since the 1800s. They started out as an off-shoot of barbers.

When you had a toothache in the 1800s, you didn't have to go far. Most barbers would take a gander and even pull a tooth — for a fee.

Back then, being a barber was a catch-all profession. And when it comes to dental insurance, we still live with the relics of barbers' professional versatility today. Mary Otto, author of the book "Teeth," told The Atlantic: "In the barber-surgeon days, dentist skills were among one of the many personal services that barber surgeons provided, like leeching and cupping and tooth extractions. They approached it as a mechanical challenge, to repair and extract teeth."

A dentist, William T. G. Morton, was the first to use anesthesia in the U.S. in 1846 to remove a tumor during a public surgery. Extended surgeries were soon absorbed into a regular medical practice.

At the time, dentists struggled to gain public trust, like medical doctors who carried the air of intellectuals.

Dentists, for all their usefulness, were barbers, usually self-taught and not terribly consistent across the board.

Today, a professional and insurance schism persists when it comes to medicine and dentistry.

Medical insurance in America sprang from a need to make factories more productive. The Blue Cross Association in Texas promised blue-collar workers a total of 21 paid hospital days a year if they were injured. By the 1950s, insured rates grew from 10% nationally to 60%.

All the while, dentists were restricted to private practices. Patients had to pay out of pocket for dental procedures. In the 1940s, clothing stores were offering dental procedures at a discount to customers.

That changed in 1954, when the International Longshoreman's and Warehouseman's union established the first dental insurance. But it was an ongoing fight for unions to keep dental plans covered at work.

The new plans were clearly needed. According to the CDC, in 1960, the average American over 65 only had seven of their original teeth.

But when Medicare was created in 1965, it also codified the divide, covering medical issues and leaving out dental.  Most insurance companies followed suit.

The Affordable Care Act provided some change. It mandated that a child’s health insurance include dental. But as we live longer, we're finding dental health is critical to overall wellness, especially as a Surgeon General report has found substantial links between oral health and everything from heart attacks to stroke and premature births.