The Sacramento Kings' Season Could Already Be Unraveling 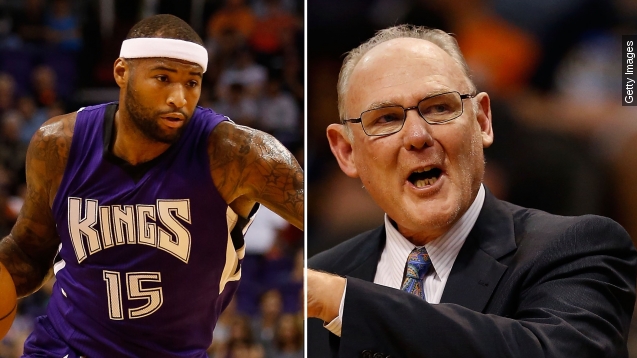 SMS
The Sacramento Kings' Season Could Already Be Unraveling
By Carter Woodiel
By Carter Woodiel
November 12, 2015
The Kings have only played a handful of games, but a player's profane rant and a coach-owner feud have created a season's worth of dysfunction.
SHOW TRANSCRIPT

The Sacramento Kings are only nine games in, but don't blame fans for thinking the season is already falling apart.

"We got some issues in-house we need to figure out," Kings center DeMarcus Cousins told reporters after Monday's loss to the Spurs.

That was star center DeMarcus Cousins. He seems to be at odds with head coach George Karl, and rumor has it Karl could be on the losing end.

The Kings' issues can be traced back to the offseason, when Karl reportedly wanted to trade Cousins, a talented big man known for wearing his emotions on his sleeve. But ownership reportedly disagreed, and Cousins stuck around. (Video via Dime Magazine)

This caused tension between coach and star, and it all boiled over after Monday's loss to the Spurs, when Cousins tore into his coach with profanities in front of the team.

Though Cousins would later apologize, the Kings dropped to 1-7 after that defeat, and Karl appears to be on the ropes. One report from USA Today speculated he could be fired within a week. (Video via The Sacramento Bee)

If the Kings do let go of Karl, who was just hired in February, it would come with a hefty price tag.

Karl's contract still has two years of guaranteed money left on it plus a $1.5 million buyout clause. In total, the Kings would wind up paying Karl nearly $10 million to not coach the team.

That could be worth it to Kings owner Vivek Ranadive, especially since it's becoming clear he and Karl don't see eye-to-eye. A report from the Sacramento Bee said Karl wanted to suspend Cousins for his outburst, but ownership pushed back. (Video via UC Davis Graduate School of Management)

The good news for Sacramento? On Wednesday night, Cousins scored 33 points, and the Kings knocked off the Pistons at home. It was the team's first win since Halloween.