The Ronda Rousey, Holly Holm UFC Rematch This July Is A No-Go 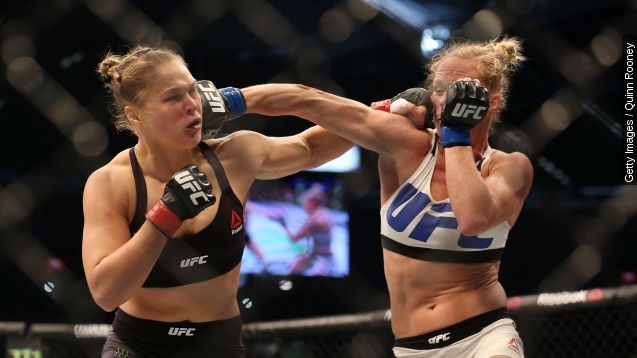 SMS
The Ronda Rousey, Holly Holm UFC Rematch This July Is A No-Go
By Matt Moreno
By Matt Moreno
January 13, 2016
UFC President Dana White said because of Rousey's role in the delayed film "Road House," she has requested more time off from fighting.
SHOW TRANSCRIPT

Ronda Rousey will have to wait even longer before she gets a shot at redemption against Holly Holm.

Instead, Rousey will be busy filming the remake of "Road House."

"Help this gentleman to the door," actor Patrick Swayze says in the 1989 film.

White told Yahoo: "She could do both, but why should she? The filming is in a time frame where she'd finish before 200, but it would be cutting it too close."

ESPN reports Rousey had intended to take time off in 2016 even before her loss to Holm at UFC 193 in November. She highlighted three UFC events in 2015. (Video via ABC / "Jimmy Kimmel Live")

Rousey is also no stranger to the entertainment business. She's appeared in several movies, including "The Expendables 3" and "Furious 7."

"I could do that," actor Sylvester Stallone said in the movie "The Expendable 3."

White said Rousey's promotion of the sport over the past three years is a big reason why he thinks she deserves time off.

Holm has also agreed to a rematch against Rousey, one that could come shortly after that July UFC event. White had previously said Holm wouldn't fight before taking on Rousey at UFC 200.

In the meantime, Holm will defend her bantamweight title against Miesha Tate at UFC 197 in March.