How The Federal Reserve's Size Lets It Influence Interest Rates 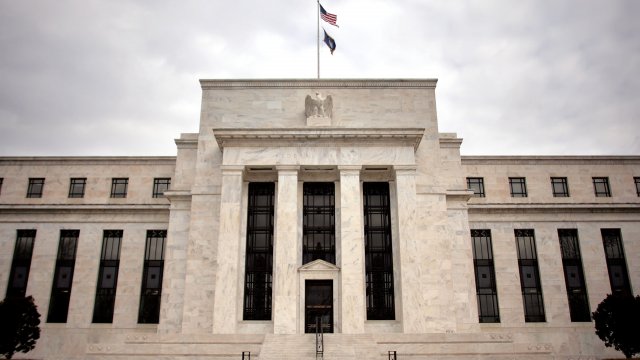 The Federal Reserve usually just called "The Fed," but isn't just one bank in D.C. with gold stashed in the basement. It's a whole system of banks and board members set up in 1913 spread across the country, with the mission of keeping America's financial system growing — not too fast, not too slow.

Here's the general structure, courtesy of the Fed website: The U.S. is broken down into 12 regions, each with its own Federal Reserve bank. These 12 regional institutions kind of serve as the bank for the banks we use. They each have their own presidents and leadership that hold the cash reserves of commercial banks, move coin in and out of circulation, give them loans and supervise the soundness of consumer institutions. In D.C., the powerful Board of Governors oversees the dozen federal outfits that dot the country. This board in theory has seven members, nominated by the president and confirmed by the Senate.

They each serve a 14-year term. Right now, three of the seats are empty. Here's where the power gets centralized: Two of the board members have higher ranks: the chair and the vice chair. The president chooses from the pool of board members, and they're given the title for four years after the Senate approves. The chair is highly influential in setting monetary policy. What is that? Basically, how much it costs to borrow money. This takes us to the last key element of the Fed. All seven board members in D.C. plus five of the regional bank presidents function as the Federal Open Market Committee.

Together, they decide if the national interest rate goes up or down. A quick economics review here — if interest is low, more businesses and people borrow money. The money floods the marketplace, increasing demand for services and products. Since demand outstrips the supply, wages and prices go up. So what cost $100 last year could be $104 this year.  This is called inflation. The Fed sets monetary policy to keep inflation low and the dollar strong.  To do that, they raise the interest rate, making it more expensive to borrow money. When it's time to grow fast again, the rate goes down.