Explaining Role of the Vice President in Tie-Breaking Senate Votes 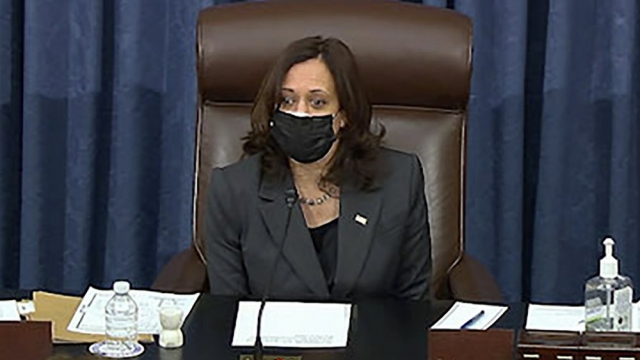 “The Senate being equally divided, the Vice President votes in the affirmative."

"And the current resolution as amended is adopted.”

Already this week, the vice president traveled to Capitol Hill three times to be on standby. Ultimately flexing her new power as president of the Senate on a budget resolution unlocking the ability to pass a COVID relief package without Republican votes.

Harris said, “I was um, voting at five o’clock this morning.. enjoyable to be there”

It's a task she's expressed some reluctance to perform as The White House hopes bipartisanship will thrive. Just before taking office, Harris wrote she will do so if necessary, but "it is my hope that rather than come to a point of a tie, the Senate will instead find common ground and do the work of the American people.”

The demand as a tie-breaker in a dead-even Senate could complicate her day-to-day work.

Historian Joel Goldstein said, “It’s a little bit of a mixed blessing because it means that she has to structure her schedule with attention towards the Senate calendar. If she needs to be at the Senate or near the Senate, she can’t be doing foreign travel. She can’t be doing domestic travel.”

Harris's predecessor, Mike Pence, delayed a trip to the Middle East in 2017 to stay close as the Senate voted on a tax reform package. His vote ultimately wasn't needed. But Pence did go on to cast 13 tie-breaking votes, a record for a modern-day vice president. Dick Cheney, who was the last Vice President to serve during an evenly split Senate, made eight, while Al Gore had four.

“Every time I vote, we win. It’s a very encouraging phenomenon,” Gore joked.

President Joe Biden never once cast a tie-breaking vote in his eight years as vice president, but was a frequent fixture on Capitol Hill.

“(You) shouldn’t predict how the set is going to vote before they vote. You won’t make a lot of money,” he said.

While Biden served in the Senate for 36 years, Harris only spent four as a senator before moving to the White House. But now as the tie-breaker, she may regularly roam the halls of Congress again - a move Democrats welcome.

Senator Amy Klobuchar said, “There are times where she may have to be nearby or even be there because we don’t know what a vote’s going to be. Sometimes it’s going to be more important than ever given the close, close Senate where we are literally a tie.”